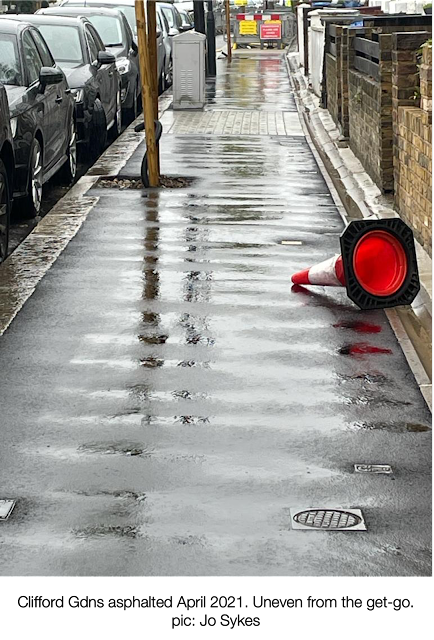 Today BRAAP - Brent Residents Against Asphalt Pavements - have released their scoping paper  LINK reporting the shortcomings of Brent Council’s 2016 Policy to replace the paving slabs on the borough’s pavements with asphalt (tarmac).  BRAAP has sent the paper to Cllr Roxanne Mashari, Chair of Brent Scrutiny Committee for Resources and the Public Realm, asking them to carry out an investigation of the processes that lead to the policy along, with its implementation and to recommend an approach which takes account of residents’ input LINK.

BRAAP is a new, unique and unprecedented alliance of residents’ associations and street groups from across Brent who have got together to campaign to reverse the Council’s policy of asphalting at all costs. 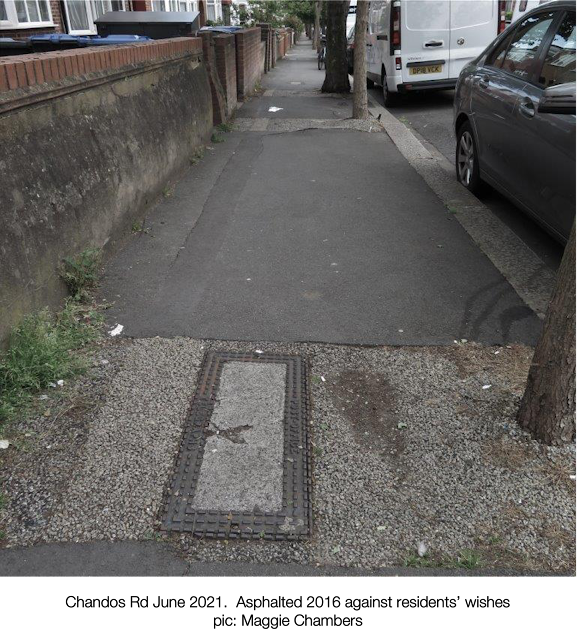 •  A lack of transparency on the long-term running costs of asphalt vs re-laying paving slabs.

•  Over 95% of petitioned residents objected to the asphalting of pavements and the resulting reduction of the quality of the urban environment.

•  A lack of meaningful consultation with residents and residents’ associations, either on the general policy or individual schemes.

•  Hurriedly arranged ‘special’ meetings with worried residents, Councillors, Officers and the Leader, where Brent claim surprise at the level of opposition, but repeat the same arguments and asphalt anyway.

•  No clear tally showing how many slabs are re-usable.  Residents estimate up to 80% could be re-laid.

•  Shockingly, when the slabs are removed they are not re-used, but pulverized according to contractors.

•  A lack of transparency about the environmental impact assessment around air quality when using diesel trucks to transport 1000s of tons of slabs to be pulverised, and more trucks to bring asphalt into the borough.

•  Roads that were asphalted in 2016, eg Chandos Road, have already degraded whereas paving done at the time looks as good as new.

•  The policy goes against the direction we should be travelling in this time of climate emergency.

* By default it is obvious that simple levelling of the slabs by workmen with hand tools will have a marginal carbon footprint compared with the use of new asphalt with its high embodied carbon and diesel intensive processes for lorries and plant. 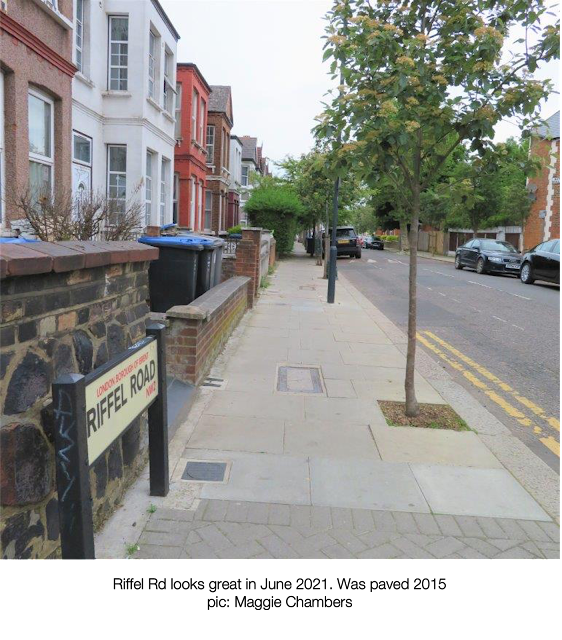 This is a unique coming together of 11 residents’ groups and associations in Brent objecting to replacing long-lasting paving slabs with cheap impermeable tarmac, which heaves and cracks,  grows moss and looks awful when repaired, radiates heat into the urban environment and is opposed by over 95% of residents.  The council should be working with residents’ and council tax payers’ interests in mind.  They say the policy is cost-driven, but they should be planning for the long term, with sustainability at the fore.  This policy is not fit for purpose.

Black radiates more heat than lighter colours.  Urban heating is a global problem and wherever there are heat reduction programmes, the first thing they do is get out the reflective white paint: the New York City Cool Roofs Programme “cooled and coated” 2,077,537 square feet of rooftop.  In Greek villages they paint the houses white.  It’s for a reason.

Brent has not disclosed an Environmental Impact Assessment to say how many diesel miles will be used disposing of re-usable paving slabs and importing asphalt into the borough.  This doesn’t sit well with their Climate Strategy for carbon neutrality.

Water run-off increases flood risk to our drains and is why the Council has strict planning regulations for residents putting in front drives or hard standings - they have to install 50% soft landscaping as well as a soak away to stop water running into the highway, but the Council is getting away with laying mile upon mile of impermeable asphalt.  It is universally known that paving slabs allow water penetration through the gaps when they are laid on a sand substrate.   We have asked Brent for the Environmental Impact Assessment relating to Sustainable Drainage Systems where impermeable surfaces are concerned.

Over and over again it's the same from Brent Council - a lack of transparency, despite it being a promise in its Constitution that the Council will be open and transparent.