Another of Brent’s beautiful tile murals – in Neasden!

Yes, this is another “guest blog” about tile murals with a heritage tale to tell, but this time they are not at Wembley Park.

1.Water sports on the Welsh Harp Reservoir, in colourful tiles.

The murals pictured in this article are in a pedestrian subway under the North Circular Road at Neasden. Although I have driven over them, and have visited Neasden a number of times in the past (to visit the former Grange Museum, and former Neasden Library on the site of the 1930s Ritz Cinema), I have never actually seen them myself!

These photos were taken by Russell Cox, an Area Manager for Daniels Estate Agents, and sent to me by his colleague, Francis Henry, who knows of my interest in local history (the Bobby Moore Bridge tile murals). As soon as I saw them, I knew that I wanted to share them with you, and some of the stories they represent. Russell has kindly agreed that I can do that.

The first mural scene above clearly represents the nearby Welsh Harp Reservoir. Its history goes back to the 1830s (you can read about that here). You may think that water sports on the reservoir are a fairly modern addition, but you would be wrong. Although the canoeists in this mural may have been from the Youth Sailing Base (opened by Middlesex County Council in 1963, and closed by Barnet Council in 2004), a canoe was first tested on the Welsh Harp by “Rob Roy” Macgregor in the 1860s! The Royal Canoe Club he founded in 1866 met at the reservoir well into the 20th century.

Since the Second World War, sailing rights on the reservoir have been leased from British Waterways (now the Canal & River Trust) by the Welsh Harp Sailing Association. It has around eight member clubs, mainly based at Birchen Grove. It is enjoyable watching the dinghies in action as you walk nearby, but the Wembley Sailing Club is offering families the chance to actually try out sailing, with a free lesson on Sunday 27 June (see the Kilburn Times article).

The Brent Reservoir (as it is officially known) was built to supply water to the Paddington Arm of the Grand Union Canal, which opened in 1801, so it’s no surprise that the murals also show scenes from the canal. “The Feeder”, which runs through Neasden (between the Railway Village and Quainton Street Open Space) and Stonebridge, to join the canal at Lower Place, was dug through Willesden’s fields in 1811. It first took water from a bend on the River Brent at Kingsbury, and since 1835 has provided the link between the Welsh Harp and the canal. 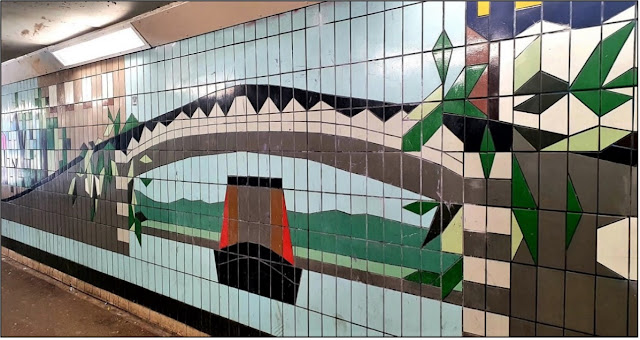 3.A narrow boat passing under a canal bridge. 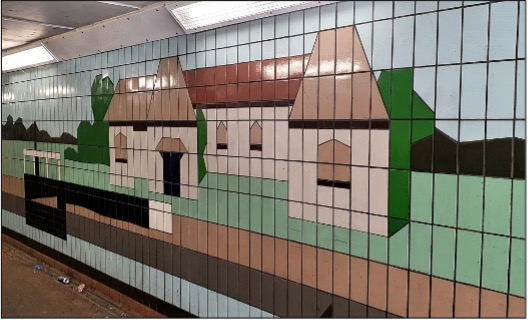 4.A lock and lock-keeper’s cottage.

If you walk through this pedestrian subway, between the shopping centre and Neasden Lane North, it might encourage you to talk a stroll alongside the canal itself. There are a number of places in Brent where you can join the canal-side path, from Alperton in the west, past Acton Lane to Kensal Green / West Kilburn in the south-east.

5.A canal-side walk, in a Neasden subway.

How did these murals come to be here, and when were they installed? I don’t know, and I’m hoping that one of you reading this can add some information in a comment below, please. I do know that the Neasden Underpass, which takes Neasden Lane under the North Circular Road, was built in the early 1970s. The subway, which takes pedestrians under the main road, was probably built as part of the same scheme, and was certainly in use by the 1980s.

Were these tile murals part of that original scheme, or were they added later, to brighten up what could have been an uninviting passageway? The style of the murals looks similar to those at the Bobby Moore Bridge, which date from 1993. They were the work of the Langley (London) Architectural Art Service, and designed by their artist, Kathryn Digby. Were these murals also from the 1990s, or were they earlier. If you lived or worked in Neasden then, please share your memories of these murals.

6.A holiday narrow boat, moored beside the canal (and the North Circular Road!).

Even if you know nothing about their history, you can still enjoy these murals, either in person or just by looking at these photos. Imagine yourself on a bright early summer day, sailing out on the Welsh Harp, walking beside the Grand Union, or relaxing on a narrow boat. These beautiful and colourful pieces of public art can help you to be there!

Be careful what you wish for - some officers at Brent Council might take your idea seriously!