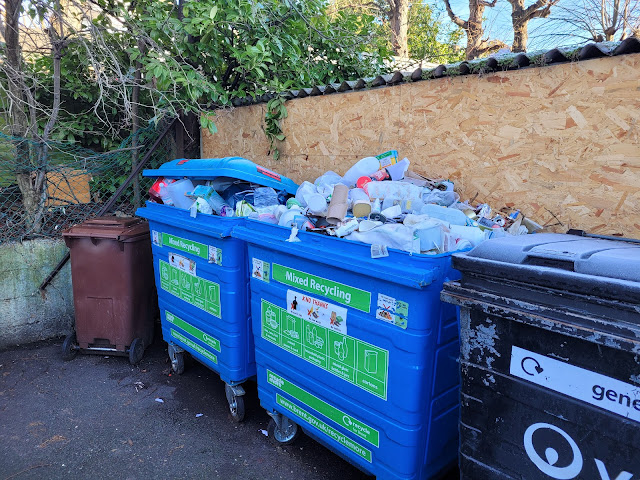 Marc Etukudo's struggle to get Brent Council to deal with problems at Newland Court, Wembley Park, have now resulted in his concerns being treated as formal complaint against the Council.  Note that the Council's infill proposals to demolish garages and build mini-houses on the site also involve reducing the number of bins.

This is the complaint:

The first issue is about our recycling bins. Now Brent Council has a habit of administering proposals and supposedly having consultation with any or all the residents affected about the proposal which is totally untrue. Brent Council actually only consulted with a fraction or a small percentage of the residents affected and then released a result that does not reflect the true figures of residents that are against the consultation if they were actually involved.

No one that I have spoken to at Newland Court received any consultation letter regarding having a trial by making recycling pickups from weekly to fortnightly. The first I or other residents found out about this was on social media where other residents in Brent were also asking if anyone was consulted about the 2 week recycling pickup trial and many were dumbfounded about it. I called Brent Council to find out why and was told that we were sent consultation letters which is untrue. 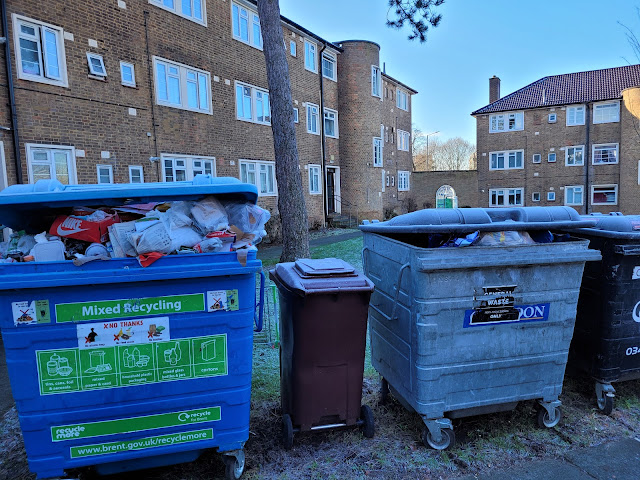 Now since this 2 weekly recycling trial pickup our bins are not being emptied fortnightly and even sometimes monthly so that our recycling bins are always overflowing and of course fed up residents are now putting the recycling waste into the residual waste which defeats the object of asking us to recycle our rubbish. When the residual waste is being emptied the bin men will sometimes take out only the bins in bags and leave the residual bins still half full. I have attached pictures for you to see and I hope you will address this issue.

I phoned Wing Parking and was told the same thing so I called Brent Council and was told that we were sent consultation letters regarding Wing Parking’s management at Newland Court which is untrue as I have spoken to several residents and none received any consultation letter from Brent. I have since found out that Brent Council said they consulted with all residents and are now doing a trial with 5 estates using Serco the security firm as their new source.

‘Systemic discrimination can be described as patterns of behaviour, procedures, routines, policies or practices that are part of the structures of an organization (Brent Council) and contributes to less favourable outcomes for minority groups (Brent Residents). Behaviours may include dismissive or derogatory comments, gossip, ignoring others, judgemental attitudes or isolating others.

I have already accused Brent Council of Systemic Discrimination regarding other issues that Newland Court residents are facing in which I hope is being looked at as I am still waiting for a response to. So can you please find out why residents at Newland Court were never consulted regarding the 2 issues I have raised and what is going to happen at Newland Court now regarding non resident drivers who have now started parking as they like on our estate and even in between the garages preventing an elderly disabled driver from getting her car out of her garage on a couple of occasions. Also can our recycling bins be emptied????

Have you checked yet whether or not your homes are on Brent's brownfield register 2022 (its available to view online)? Kilburn Square certainly is brownfield there hence its ongoing local difficulties.

Not Kilburn south has brownfields, even a 3/4 size reduced but renewed in 2010 now 'pocket' public green open space is in 2022 green un-map slotted-in as become a brownfield. Easy to understand the developer meaning of pocket.

I asked because one of the SK brownfields 2022 is not clearly named.

Worth also looking closely at how the new build housing relates to the existing estate blocks.

Street care and bins on council land streets, the council is the customer and they don't complain, while private owned roads do complain and therefore customer service is required and resources prioritised and focused. 22 years South Kilburn housing intensification on public land with doubling vehicle roads aim, the street uncare to resource elsewhere situation will never change in this zone not matter how housing intensified forever South Kilburn becomes.

I didn't think Brent Council could get any worse, but they've done it yet again. The London Distopian Borough of Bent carries on ignoring its residents' needs and views. Not to worry , they keep allowing more developments of unaffordable homes while calling them council homes and not mentioning that Brent residents can't afford them. As for the proposed boxes on the garage site, if it goes ahead it should be called Butt's Slum Court or Tatler's Bankrupt Folly or Knight's Nightmare No Gardens

However, as a taxpayer forever blessed if you live in a preservation, conservation, protection anti-population growth "learn to live with it" Brent zone.

Marc is right, Brent Council have a very flawed consultation process where only a few people or residents in certain areas are consulted. You then hear it from a third party or from someone who heard it from someone else. The only way you know what is going on in Brent is to keep going on their websites to find out things. Who has the time to keep doing that?

Brent Council have no processes in monitoring the services they boast about on their website and the feedback saying that they are doing their job well and are delivering on everything they promise is another joke .

Brent Council has got more greedy over the years more so since they moved to their new home at the Civic Centre .

Labour needs to go.... they are selling out to Developers, their is litter everywhere around Brent, the streets are filthy on most days because they have no cameras and not adequate lighting on most estates in Brent encouraging people to fly tipping on estates . NEWLAND COURT recycling collections have been extremely poor for the past two years atleast . I have definately not seen collections weekly at all and Brent Council are answerable to us all for their lack of presence in the community

Labour Councilers only visit when they want votes and promise the world and yet time and time again they fail to deliver on the basic needs of the residents who put their trust in them .

They are very good at robbing us off with their scripted jargon most likely a" cut and
paste " I pray that all the Brebt Council Staff get their act together and do justice to the role each one of them signed up for.

It's very disconcerting and disappointing how little attention Brent Council pays to views of its residents.. that's if they actually even consult..am a resident of Newland Court and was never consulted about wing parking..and where I have been consulted about the infill proposals the Council has so far utterly ignored our views.

Well done Marc. I live at Newland Court and was just in the kitchen washing up the breakfast dishes and suddenly I see the rubbish truck reversing down our road. On a Sunday I thought!!! Yes, they were finally emptying all our overflowing recycling bins after weeks of missing them. Only thing is they don't clear up the bits that they drop everywhere. But well done for all your work representing Newland Court residents Marc. You should become our ward councillor because the 2 representing Barn Hill at present only represent them selves.

Thanks D Henlow and Anonymous for your comments. The problem is that with the removal of caretakers (not all councils have done so) and the sourcing out contracts to private companies which extort millions from the councils instead of having their own plumbers, carpenters, heating engineers etc. The councils then have people in well paid jobs who don't know how to liaise or co-ordinate and are not trained to be people friendly as in customer relations, then council residents have to wait ages for responses to issues. And yet after all these years, the councils still don't get it.

There is no Quality Control in Bent Council.
No person ever checks that these contractors do their job as per the contract.
They blindly sign off on invoices by these contractors without ever checking with the Tenant that the job has been done to their satisfaction.

Looks like you could be a re-development screen wall of new and in-keeping on the main road- for the conservation and protection priority north behind you?

Sorry for the sp Finchley Road.

Looking at the Mayors Registry of Public Land, you need to get your council blocks, their precise forms and generous green space and amenities full mapped and registered urgent at the Land Registry by Brent.

City of Westminster allows and applies this civic justice, but Brent prefers flat numbers on land vague, the South Kilburn way meaning no rights to community or rights to place where you live.