Some creative and practical ideas on the Staples Corner Masterplan consultation. Contribute your thoughts.

Staples Corner from above (Brent Council)

It is all too common for Wembley Matters to hear from residents they were not aware of development proposals or consultations. Here, in a guest blog, a resident shares their message to Brent Council on the consultation over the preparation of a Master Plan Supplementary Planning Document (SPD) on the future of the Staples Corner Area.

In TRANSPORT terms, it is currently horrible for pedestrians and cyclists around Staples Corner. Even for motorists.
Brent needs either to take on in battle the London Mayor's 'Transport for London Streets' planners and reduce the amount of ugly and hostile 'severance' that his main roads create in the area, or you need to divide up your Brent plan and turn AWAY from the main roads to treat each area entirely separately. 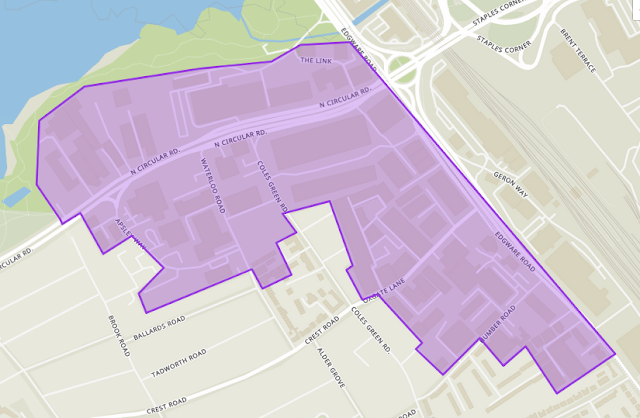 Given the 'excellent' 24-hour main road access for goods, you should intensify industrial development, perhaps with flatted factories to encourage small businesses. Industrial and commercial areas need a great deal of greening as well though. Thirty years ago you attempted it in Park Royal with 'pocket parks'. Planning guidance must insist on setback and maintainable green borders around all industrial sites. Fencing design is important as well, with no ugly, cheap, bog-standard 'bayonet' galvanised-steel fencing (for a change).
Given the soon-to-open Thameslink station there and the potential 'West London Orbital' London Overground line to Neasden station, Harlesden station, HS2 Old Oak Common and into south-west London, you have high enough 'Public Transport Accessibility Level' values to build new housing at high density (which does not have to mean high buildings).
Please clarify in your documents what is zoned as 'Strategic Industrial Land' and what is not. Are you planning to change its boundaries? Would there be mitigation (such as higher-density industry in what is retained)?
Pedestrian and cycling crossings across the A5 need to increase in number and quality, and at all side road junctions, with NO 'slip road geometry' on the road corners from the A5, so that LINKED road junction traffic lights / pedestrian crossing lights can keep speeds down to 30mph or below - which would be a novelty.
The main A5 slip roads from the A5 flyover should be reduced in length and width - not intended to reduce capacity but to reduce speeds. They are currently of a scale for 70mph traffic.
Current traffic speeds on the main roads are either near zero when there is congestion, and very high when traffic is light.
The North Circular Road was going to be a motorway, the 'M15', but the A5 technically was NOT, and that road can be re-urbanised and humanised without much opposition, if you use planning gain money to finance the changes.
Ex-London Mayor 'Boris-the-Now-Disgraced' had a London-wide 'Roads Taskforce'. That declared that roads should have a MOVEMENT function but also a SENSE OF PLACE function. Brent's task is create the latter on the Staples Corner main roads for the first time since the 1975 'improvements', particularly on the A5 main road.

This Brent Council's description of the consultation:

Brent’s Local Plan designates Staples Corner for housing and industrial growth, with the ambition to transform the area into a new mixed-use community with at least 2,200 new homes and new business premises fit for modern day occupiers, with an improved environment and supporting infrastructure.

To achieve this ambition, the Council is developing a Masterplan that will provide the detailed vision and planning policy framework for regeneration and growth in Staples Corner for the next twenty years.

Brent will work with local communities and stakeholders to ensure the Masterplan and the Design Code for Staples Corner reflects local aspirations.

The Residents' Survey opened on December 1st with little response so far. It closes on 30th April 2023.

There’s such huge and massive holes in this wretched plan. How on earth will a very small area, already well built up and occupied, shoe horn in the homes for 2200 people? There is NO spare unused land. Brent have banned converting office and commercial space to housing, and that’s what Staples Corner consists of. I guess they could stick tower blocks round the edges, but given the land ownership is piecemeal in the extreme, god knows how that will happen.

What really annoys me is that Brent rejected an application recently which would actually have been a positive improvement. H R Owen wanted to built a service operation on Humber Road, replacing tatty old workshops. Much better and smarter, but Brent bounced it.

Like every other master plan this is pie in the sky fantasy. It’s also still predicated on the Brent Cross expansion which is, as we know, dead in the water.

No, Brent has issued an Article 4, to remove permitted development rights from developers.

That freely allowed conversion of industrial and commercial properties, without needing permission, into housing. Not the same thing at all.

"A developed country is not a place where the poor have cars. It's where the rich use public transportation."

We are 8 plans of moving the goalposts gamification and year 22 in now, at the terminal zone stage where Master Developer simply doesn't want to know or engage at all with in zone product consumers.

I didn't realise how close beautiful Welsh Harp is to the North Circular, a wall of towers along its south side risk? Mid -rise even high rise street facing 2 storey houses is in an everything goes ZONE OK, Buy 4 houses a tower is site possible, so bit-by-bit many plans also looks most likely.

Study the Mayors Public Land Registry Map and heavily defend Welsh Harp and get the big green investment into it now as Phase 1, repeat how Wormwood Scrubs Common is being protected from developer colonialism.