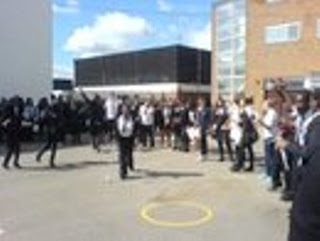 The school students strike at Kingsbury High School did go ahead today. Around 200 pupils stayed out of lessons, chanting and protesting when the bell went. They demanded a meeting with the Head who agreed to meet them later in the morning. At this meeting, complaints were made that once again only one side of the academy argument was given. There are plans for an important school council meeting at the start of the new term.

Note: This year marks the 100th anniversary of the 1911 Children's Strikes when pupils marched out of schools all over the country inspired by industrial unrest at the time. They made their own demands on issues such as corporal punishment and homework.
Posted by Martin Francis at 17:46:00

how is he putting himself first?

I went to this School, and personally don't want to see something that I am so used to change. This was where I grew up, for 7 years of my life, changing it would mean, I would have no identity with it anymore! It should not be changed!

KINGSBURY HIGH should not
change !

Well wexamn is back 7 years later after the last head teacher was a failure. Kingsbury is going downhill and there is no way to stop it.