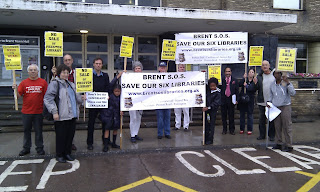 Leader of the Council, Ann John, tonight withdrew the Asset Strategy for the disposal of vacated libraries from the Executive Agenda. She said that this was because of the proximity of the judicial review and  councillors were constrained on what they could say about the issue. Campaigners thought it was withdrawn because the Executive had thought they could slip it thought unnoticed but word spread quickly over the weekend with the Council inundated with many requests to speak today.

The Save Preston Library's 5,897 signature petition opposing any sale or redevelopment of the Preston Library site that does not include a Brent public library, will now be presented at the August Executive when the item is discussed - unless of course campaigner's win the judicial review in which case it will be irrelevant.
Posted by Martin Francis at 20:23:00