Brent Council's negotiations with Veolia over the new waste strategy seem to be in trouble and have resulted in proposals for even more drastic reductions in street cleaning services than first expected. Officers say these have to be rushed in time for the October implementation of the new waste strategy despite negotiations with Veolia not being completed.

It is now proposed that in addition to the reduction in Zone 5 sweeping to one per week  that:

Welcome to Brent - the Dirtier Olympic Borough
Clearly these reductions are going to make an impact on the appearance of the borough as well as making 50 street sweepers redundant. Probing a little deeper it is clear the the Council has not fared well in its negotiations with Veolia. The report to the Executive states:

In outline, it has not been possible to agree the reductions sought by the Council in respect of the waste collection arrangements partly because Veolia are seeking, through this significant change to the contract, the opportunity to try and improve profitability for the remainder of the contract which has, in their view, been eroded by a number of factors since the original start of the contract. Similarly, they are seeking to ensure through the negotiation of the changes to the street cleaning element of the contract, that they have a higher level of profitability for the remainder of the contract than they have recently been enjoying. In consequence, the reductions to the street cleaning regime recommended to meet the 2011-12 and 2012-13 budget requirements, are larger than might have been expected.

This is an understatement. The report reveals that as well as Veolia adding back into the contract indexation, costs that they claim to have been bearing in previous years, an inflation increase of 1% to which they were previously not entitle, there are additional costs of hiring vehicles rather than purchasing them (see my previous blog) and what the report calls 'other refinement by Veolia of figures'. All this added £362k to the budget gap. The report considers various ways of closing the gap but admits that if the savings are not made they will have to be found elsewhere in Environment and Neighbourhood Services. Cllr Powney will be responsible for finding these savings - or more bluntly, making these cuts. The proposals will go to Monday's Executive. The agenda and documents can be found HERE

One controversial element of the savings is Veolia's offer of  reduction in 'gate fee' for dry recyclables from £30 to £22 but this is contingent on less than 5% contamination which will be difficult to achieve with co-mingled collections.

The Brent waste contract comes up for renewal in 2014 and Veolia are also a likely bidder for the huge West London Waste Authority contract LINK The report notes that Veolia are seeking 'through the negotiation of the street cleaning element of the contract, that they have a higher level of profitability for the remainder of the contract than they have recently been enjoying'. Officers recommend that negotiations continue and are escalated to a higher level.

The budget is outlined below but other information in appendices to the report have been declared 'confidential' and not published: (click on image to enlarge) 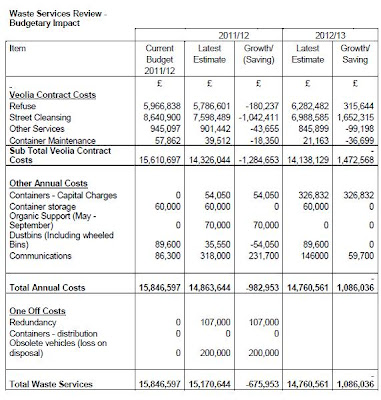 I love when people initiate public cleaning of the streets. I love such activity here and around the world. Cleaning Services.

Cleaning is very essential ,for the environment to remain clean and tidy.All the citizens of the country are ought to keep their sorroundings clean.