Many thanks to Haringey Greens for this blog 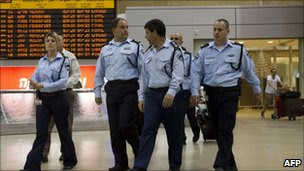 Veteran peace and Green party activist Anne Gray , one of twelve Britons arrested and jailed at Israel’s Ben Gurion airport, Tel Aviv last Friday 8th July, was released late last night and placed on a deportation flight from Tel Aviv after spending five gruelling days of incarceration in a filthy cramped cell. Six other British activists were also aboard the flight which landed at Luton airport around midnight last night.

Ms Gray, who is well known in Haringey for her tireless community activism and campaigning as the Green Party parliamentary election candidate for Tottenham last year, had planned to stay in Palestine until July 16th, as part of an international 'Welcome to Palestine' initiative, working with Palestinian NGOs to support and improve the daily lives of local people.
Gray,
Just hours after arriving back in London, Anne Gray said:
“As soon as we said we were visiting Palestine, the airport authorities branded us, and several hundred other travellers, as troublemakers intent on demonstrating and disrupting the airport. We were given no chance of explaining who we were and the purpose of our trip.

“Our mission was entirely peaceful. We simply wanted to study and work with Palestinian NGOs, listening and observing and lending support with things like negotiating checkpoints and taking children to school through areas with hostile settlers. The organisations we were planning to visit do cultural activities like dance, theatre, and education in human rights law, drawing youth away from stone throwing into other forms of political expression.

“I’m furious at the way we have been treated. We were denied entry to Palestine for no good reason at all – it was all stereotyping, a total smear campaign by the Israeli government and media.”

Deputy Leader of the Wales Green Party, Pippa Bartolotti, is still being detained in Israel with three other women from Wales after refusing to be deported. The British consul in Tel Aviv was speaking with them in the jail when Anne Gray and others were taken to the airport yesterday.

So, at least for Anne and the majority of British activists, their ordeal is over. They have succeeded in publicising the plight of the Palestinian people and the belligerent attitude of the Israeli authorities to peaceful protests.
Posted by Martin Francis at 17:58:00