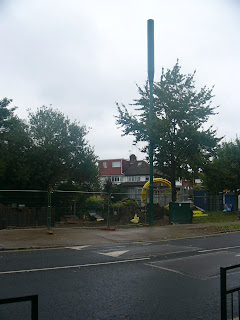 Regular readers will remember that residents, the council and Brent Green party opposed the erected of a Vodafone mast at the Avenue in Wembley on environmental grounds. Brent Council refused pemisision but this was over-turned on appeal.


The siting of the development would be considered inappropriate to this existing setting. The resultant clutter of equipment would be considered to harm the visual amenity value of this site, which as described above has an open and green character. The proposed mast would be an incongruous feature in the streetscene, and would be harmful to views out of the nearby Barn Hill Conservation Area.

You can make up your own mind on its impact on the area from this photograph. Incidentally the mast is about one metre shorter than the proposed floodlights on the Preston Manor School multi-use games area,
Posted by Martin Francis at 12:07:00

Email ThisBlogThis!Share to TwitterShare to FacebookShare to Pinterest
Labels: vodafone. The Avenue