Keeping Up with Brent Cuts 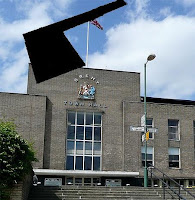 I reproduce below an extract from the weekly digest of the local press I circulate to Brent Green Party members. It provides an over-view of the latest news on cuts. The Willesden and Brent Times (WBT) e-edition can be accessed HERE  and the Harrow Times HERE

The contrast between Ann John's comments and the WBT editorial is interesting. The financial reasoning behind the Kingsbury High School academy decision is also significant.

HOW CAN WE AFFORD NEW CIVIC CENTRE WWOp14 (lead letter),  PLAN WILL COST US FOR NEXT 25 YEARS WBTp16, HOW WILL THIS BE PAID FOR? HTp24 Letter from Shahrar Ali as Green Party GLA candidate for Brent and Harrow questioning the financial and environmental claims made for the new Civic Centre currently under construction.
ROAD SWEEPING REDUCTIONS 'WILL MAKE US THE DIRTIEST OLYMPIC BOROUGH' WBTp2 Martin Francis criticises Brent Council's proposed cuts in street cleaning and the abandonment of the seasonal leaf service.
LIBRARY PLANS ARE 'UNLAWFUL' WWOp1 Coverage of the first day in court of library campaigners' application for a judicial review of the Council's decision to close 6 of the 12 Brent libraries. The claim is that the decision failed  to take into account local needs, could lead to indirect discrimination and that the decision was 'predetermined'.
LIBRARY SELL-OFFS ON HOLD WBTp4 Council plans to sell-off two library sites were deferred until August at Monday's Executive due to the judicial review.
JOBS FEAR AS HOSPITALS TRUST FACES £92M FUNDING CUT WBTp2 The NW London Trust (Central Middlesex, Northwick Park, St Marks) is to lose 24% of its budget. Doctors say that it cannot achieve these savings and will fall short by £25-40m.  Health Emergency say that 'it is the people whose care can be put off who will suffer. It is people waiting for operations, older people who need long term treatment and front line staff who will lose out. If staff do not lose their jobs, their their workload will increase....The government has asked for a cut too far'.
CALL FOR ACTION OVER HOSPITAL WAITING LISTS WBTp5 Hospital waiting lists have soared by 10% in Brent with 3,000 people on the lists.  Cllr Zaffar Kalwala (Labour, Stonebridge) says expected cuts will make it worse. The Trust confirmed the rise but said they are on track to better their 18 week target for referrals within the Trust.
NEIGHBOURHOOD POLICE REVAMP IS 'NOT TO MUCH TO WORRY ABOUT WBTp5 21 sergeants in the Safer Neighbourhood Teams will have to reapply for the 16 jobs that will remain after cuts. Chief Supt Gardner said that the wards to be reduced are still being considered but that the issue had been anticipated and that Brent invested in three detective sergeants and four detective constables to investigate neighbourhood crime ;so in fact this will not impact on Brent'.
HOMELESSNESS TO 'SOAR' AS CUTS BITE SAYS CHARITY WBTp9 Cricklewood Homeless Concern say that reductions to public sector provision and caps on housing benefit have led to a 'sharp increase' in homelessness. CHC after 20% cuts is struggling to deal with the average 150 people a week who seek their help. More than 10,000 people in Brent are affected by the benefit cap and are already in force for new claimants and will affect existing claimants early next year.
GOVERNORS VOTE FOR ACADEMY PLAN HTp8 The Chair of Governors of Kingsbury High says that one of the reasons for applying for academy status was their need for increased funding  because the equalisation of funding between 6th forms and further education colleges means they would lose £1,016 per student in their 400 pupil 6th form by 2013. FUNDING OF FESTIVALS WILL STOP WBTp2 Brent Executive cut the money for religious festivals in the borough on Monday saying it was unfair to give the money to certain religious festivals. Cllr Paul Lorber said the religious celebration had been open to all and were designed to improve relations between communities. In answer to his question about th Council's retention of fireworks night Cllr Ann John said this had been retained for health and safety and not religious reasons.
MANY SERVICES ARE STILL BEING IMPROVED DESPITE CUTS WBTp15 Column by Ann John, Labour leader of Brent Council who says that despite the cuts 'it is not all doom and gloom' because regeneration is continuing and they've resisted government attempts to force up council rents to unaffordable levels.  She says the Council is making Brent a greener borough through schemes to increase recycling, tackle fly-tipping and getting rid of old inefficient buildings.
COUNCIL MUST LISTEN TO VOICE OF THE PEOPLE WBTp16 Editorial which says that campaigners on various issues could 'hardly have failed to have noticed that the town hall is ignoring your views'. They cite the libraries issue, parking permits and day care centres. On the Stonebridge Day Centre they say, 'Brent council will say they had no choice; but "following orders" is no excuse, the council should have fought to keep the centre, they could have found an alternative to closing it. They could have listened to the people who pay their salaries and expenses, whose votes they canvass for at elections - the very people they are supposed to represent.'