"Let's all go down the Strand and bring your banner..." - library closures hearing next week 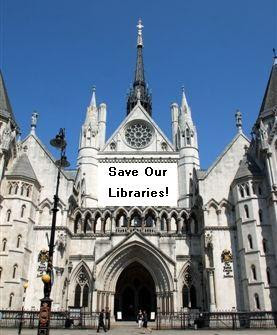 Campaigners' application for a judicial review of Brent Council's decision to close six of the borough's 12 libraries will be heard in the Royal Courts of Justice next week.  The hearing will take place on Tuesday 19th July and Wednesday 20th July. There is a possibility that it will spill over to the morning of Thursday 21st July.

Brent SOS Library campaigners and Brent Fightback supporters will be assembling outside the Court on Tuesday and Wednesday at 9am (the hearing is expected to start at 10.30am) and again at 4.15pm with banners and placards. Please try and get along and bring your own placards.  There should be seating in the court for between 60 and 80 people and the presence of those affected can be positive in terms of curtailing the more outrageous claims that the defendants could make in their absence.

The case is significant because it is the first legal challenge to library closures. There are almost 4000 pages of documents before the Court and over 200 pages of witness statements. In a nutshell, campaigners argue that the Council decision was flawed because it:
The Royal Courts of Justice are in the Strand and the nearest tube is Temple MAP
Posted by Martin Francis at 11:23:00

The Save Friern Barnet Library campaign group wishes our fellow Brent SOS Campaigners the best of luck. We will circulate this information at the next meeting, and also this has been sent out via email.