Butt: Libraries 'not an issue' in leadership change 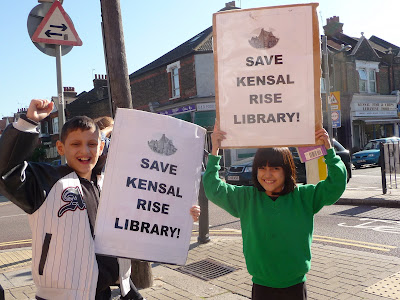 In an interview with Michael R Goss of BNCTV LINK incoming Brent Council leader Muhammed Butt  says that the library closure controversy was 'not an issue' in the leadership change which saw him ousting Ann John.  He said the change was 'democracy in action'.

He defended the Civic Centre project and the Willesden Green regeneration and said that the library closure programme was forced on the Council by the Coalition's funding cuts. The interview was conducted yesterday before the Council emptied the Kensal Rise Library. He said that  no action can be taken on Kensal Rise until the outcome of the reverter to All Souls but that once in office he will respond the various e-mail from campaign groups.

In a key passage outlining how he would be different to Ann John he said:


What I want to do is take stock of what we're doing at the moment and see what we need to do taking into consideration the budget we've just implemented.  The we need to engage with our councillors, especially between the front bench and the back benchers - get them involved in the decision making process so everyone has an input and also I want to have more engagement with out residents and the electorate, listen to them rather than just sort of blindly defending our decisions.

I want to be able to go out to them, reach out to them, explain to them as to why we've taken the decisions we have.

Asked if this was an issue in the library controversy he said:


We should have got our messages a bit more clearer and that's why I'm saying we want to engage with people. I think our communication with the library campaigns, the electorate and perhaps within the Council, could have been a lot clearer and we could have explained things in simple terms, easier terms and expressed the enormity of the £32m cuts we had to make.


Muhammed Butt said that the resignation of the Labour Chief Whip was just a matter of taking advantage of the AGM. He expressed confidence in Cllr Shafique Choudhary, the new whip, and said he was confident that the Labour Group would get behind his leadership despite the close 21 to 19 vote.

Let us not forget that Sue Mckenzie (Head of Library service) made no secret of her desire to close 4 libraries as soon as she was in the post. It was just a matter of time before she got even more than she wanted.I must say it was a surprise to see her get her hands dirty today,clearing out the stock at Kensal when she has always been notably absent at library events that PROMOTE the use of her service. I imagine she really enjoyed getting rid of all those annoying books.