The Kilburn Times reported yesterday LINK  that it would be difficult to enforcing the public drinking ban for the FA Cup Final today:


With up to 90,000 fans arriving often with their own drink, it is clear that the street drinking ban cannot be fully enforced with the resources we have.

In this first year it is more about education of the local alcohol industry, football fans coming to Wembley and those officers policing the event. It will take time to eradicate these issues.

We will take action were appropriate.

When I walked around Bridge Road and Olympic Way today it was clear that the strategy was different compared to the semi finals. There was still plenty of public drinking in evidence but police were confiscating alcohol as people left the Torch Pub... 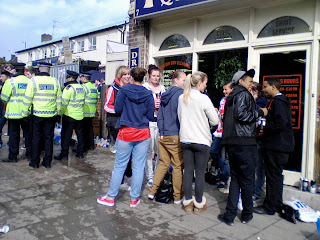 and again before they entered Olympic Way... 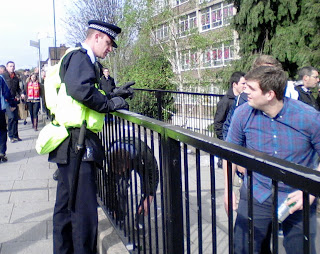 and at the foot of the steps. 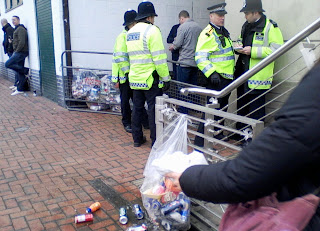 However it was clear from the evidence that by 4.30pm an awful lot of street drinking had taken place: 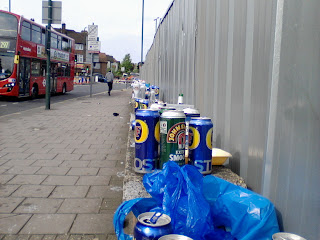 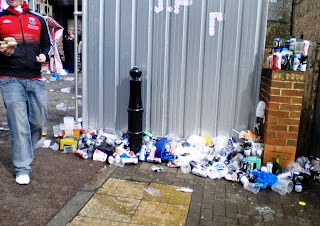 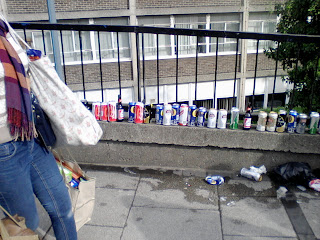 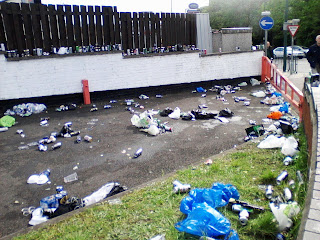 And I did see someone urinating on the pavement outside the Torch.
Posted by Martin Francis at 17:55:00

Around Ealing Road and Wembley High Road we see empty beer cans and whisky bottles strewn around our streets every day!!! Not a sign of anyone being fined for littering or on-street drinking.

We also see men urinating in our streets every day!!!

When I challenged Brent Council about why existing rules on littering and on-street drinking were not being enforced they said that they did not have the resources to enforce them and in any case they could not put their staff in a position of risk (seems odd that they can send out traffic wardens?).

In fact our MP Barry Gardiner did not even know about the ban on on street drinking until I raised the issue with him!

Why should they pick on visiting football fans if they will not tackle the local people or visitors to the shops, restaurants, bars and huge number of betting shops in Ealing Road and Wembley High Road???

Visiting football fans are a regular but uncommon problem in Wembley - everyday littering and drinking around Ealing Road and Wembley High Road is a major issue that needs to be addressed!

Lets have another license in the name of litter

It's strange how we are permitted to smoke to our hearts content on the dirty cracked pavements of wembley, but we cannot do the same when it involves alcohol...although I can fully understand why there is a ban...but when I see the endless cigarette stubs and empty cigarette packets that litter the pavements every single day, it really upsets me...I don't know all there is to know in life, but one thing I do know is that the human body was not designed to be abused with either tobacco or alcohol...and the pavements were not laid down to be used as unofficial ashtrays and dustbins...and yet that is is exactly what has become the norm...and it really upsets me...this is one of the reasons why I will never again vote for any politician...why should I or anyone put their trust in someone or a group of people who misuse their authority?
you do not build up a human society by teaching people to break themselves down...yesterday afternoon I looked at an old slimming magazine from the 1970s and guess what was inside it?
an advert for a packet of cigarettes...now would you expect to see a shire devoted to satan the devil in a christian place of worship?
of course not...yet in the 1970's a magazine based on promoting health actually considered it acceptable to allow something extremely unhealthy to be advertised in its magazine...to allow that should have been unthinkable but it obviously wasn't because as usual people were thinking of money first...and yet this is meant to be a christian nation...but if that is true where is the evidence of the putting on of the new personality for example which is one of the must do's regarding christianity?
but what that showed actually is that what the christian apostle paul wrote about critical times hard to deal with will be here, has come true...also what he wrote about people having a form of godly devotion but proving false to its power has also come true...afterall if we are meant to be on whole a christian nation, what are we doing selling something to our fellow humans that 100,000 of their lives every year?
christians are meant to love our neighbours...we show more love for money than our neighbours...and yet even that was foretold be the apostle paul that men would be lovers of money and lovers of themselves and pleasures rather than lovers of god...it is in vain that we carry on the tradition of christmas and easter while we carry on doing unchristian things...this may not be what people want to read but it has to be said...britain is an extremely corrupt country...

Whilst I too hate the sight of cigarette stubs and empty cigarette stubs thrown onto the streets you must agree that chain smokers are not generally a danger to the public! The ones who are a danger to the public are those consuming large amounts of beer and whisky, as evident from the piles of beer beer cans and whisky bottles strewn around the streets off Ealing Road and Wembley High Road. You see this everyday and you also see guys standing drinking beer and whisky for 'breakfast' and then going off to do a job!

The council needs to tackle the problem of everyday on-street drinking rather than just persecuting visiting football fans.

I am visiting your area for the Championship play off final with my 10 Year old daughter and friends. I work as a police officer in Gt Yarmouth, Norfolk and we have got rid of the drinking ban as it was un enforceable. we now clamp down hard on the anti social side of it and the littering. I want to come to enjoy the game and have a couple of drinks. Wembley would be far better letting us have drinks at the ground, car parks ect as this would be easier to Police and would ease the pressure on the pubs. They could provide toilets and make it a bit more civilised and improve your lot as well. get all your local people together and make the politicians listen.