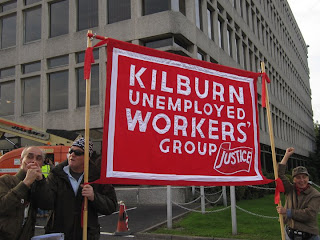 Alan Wheatley of Kilburn Unemployed Workers Group arrived at Brent Council's Scrutiny Committee meeting last night, with just approved press statement on the leaflet licensing fiasco. He came straight from the KUWG meeting that ended at 5pm the same day on the Camden side of Kilburn. He writes of his experience of the meeting:

"That image seemed to be an artistic installation representing what Brent Council's Council Tax on free speech will do to our public witnessing of the impact of despotic central and local government policies on local people."

This is KUWG's press statement:

Brent Council plans to institute licensing of organisations other than charities and political parties that deliver leaflets in the Borough of Brent. “This is not only an attack on free speech,” said Alan Wheatley, a spokesperson for the group. “It is also a way for despotic local and central government to bury disclosure of how widespread oppressive measures such as the sanctioning of benefit claimants actually are.”

“The Council say that they do not want the reputation of the Borough of Brent tarnished by littering over the time of the Olympics. As usual, the Council has its priorities wrong while at the same time it is throwing people in South Kilburn onto the street and central government's attacks on poor people exacerbate the desolation and isolation that come with poverty.

“The Olympics serve as a branding platform for global corporations such as McDonalds that are notorious for shoddy employment practices and for product that leaves loads of street litter. Our leaflets, by contrast, help counteract the desolation and isolation that vulnerable benefit claimants experience via Kilburn Jobcentre and the JobCentre Plus network. Our leafleters are not paid, and to make our resources stretch further, we display our leaflets rather than thrust them under people's noses. People ask us for the leaflets that tell of our weekly meetings at Kingsgate Community Centre on the Camden side of Kilburn, and more. Further, people who attend our meetings who have had bad treatment at the jobcentre and/or through the testing procedures of Atos Healthcare that reduce the number of disability benefit claimants without curing them of their ailments, feel less inclined to throw themselves under a bus.

“We know of people who have won their tribunals for entitlement to Employment & Support Allowance and had but a month in which to enjoy their back money before dying in this the year of Queen Elizabeth II's Silver Jubilee. The wait for a tribunal is about a year these days. Serial re-testing of claimants adds to their stress. The Royal Family, who cost the taxpayer much more per head, are comparatively in glowing heath.

“Through the invitation to our meetings that our leaflets represent, people who have been subjected to bullying that goes through the Chancellor of the Exchequer and ministers at the Department for Work & Pensions begin to feel better about themselves.

“Brent Council's proposed daily leaflet licensing fee of £75 is greater than the sum total of £67.50 weekly Jobseekers Allowance plus £5 per week earnings disregard for a single person aged over 25. That fee would hit us and our members hard,” s/he said. “Non-claimants generally remain blithely ignorant of the facts of how low state benefits are, and the fact that the £5 per week 'earnings disregard' has remained unchanged since 1988, but our leaflets help to set the record straight about that and the sanctions against claimants that are now routine.”

Kilburn Unemployed Workers Group meets every Thursday at Kingsgate Community Centre, 107 Kingsgate Road, NW6 2JH from 3pm to 5pm. With a dearth of such groups around London, KUWG helps benefit claimants in Brent and Camden and beyond to the help they need, when they need it.