Get rid of your surplus and broken electricals on Thursday 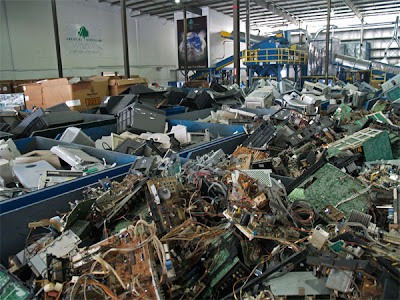 Today's fast moving developments in electronics combine with  feverish consumerism,  the search for the latest gadget and a 'throw away' society to produce a breathtaking amount of electronic waste. Computers, printers, video players, analogue TVs and mobile phones are a major stream along with broken kettles and other kitchen gadgets.


Harrow Council is giving residents a chance to get rid of their surplus electricals and  simultaneously showing concern for the environment by giving them a chance to  drop off unwanted electrical appliances at the council’s ‘Bring Event’ on Thursday 21st June.

As part of National Recycle Week, Harrow Council’s Civic Centre will be transformed into a collection site for unwanted or broken electrical equipment. The event is being supported by 1, 2, 3 Recycle for Free, a free electrical recycling service recently launched in Harrow.

The service collects items directly from businesses to be recycled at an approved treatment facility. The service is a partnership between DHL Envirosolutions and SWEEEP Kuusakosk, supported by Harrow Council.

By recycling old electrical appliances instead of throwing them away, residents will be helping to save landfill space, save valuable resources and prevent damage to the environment. We must reduce and reuse wherever possible!

Harrow residents are doing tremendously well at recycling – our rates are among the highest of all London Councils. This is why waste minimisation has been identified as an area we would like to work on. Reducing waste will ultimately have a huge impact on landfill costs.

A staggering 1.2 million tonnes of electrical waste goes to landfill in the UK every year - the equivalent of 150,000 double decker buses.

To do your bit to reduce the general level of waste that the borough sends to landfill drop your unwanted electrical equipment at the civic centre in Station Road, from 9am until 4pm.

For more information on the service provided by 123 Recycle for free, please visit http://www.123recycleforfree.com
Posted by Martin Francis at 10:56:00