Lucas on the Coalition's Trident 'cowardice' 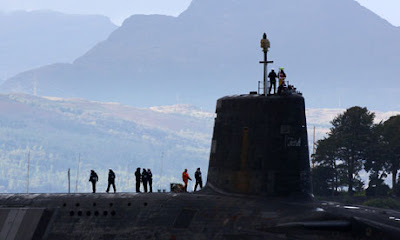 Defence Secretary Philip Hammond today announced a £1billion contract to cover work on the reactors used to power the UK’s Trident submarines, despite the fact that a decision on renewing the nuclear deterrent will not be taken until 2016.

Caroline Lucas, MP for Brighton Pavilion and leader of the Green Party of England and Wales, said:

The Defence Secretary’s announcement of a £1billion contract to include the development of reactors that will power the as-yet-unauthorised next generation of nuclear submarines raises yet more urgent questions about the profligate spending habits of the MoD – and the Coalition’s cowardice on a crucial political issue.

The Government chose to delay the decision on replacing Trident until after the next election in order to prevent a major Coalition fall out – and now the taxpayer is having to stump up for technology that may not even be needed, while our public services take the hit from austerity.

If the Government is determined to plough ahead with this spending spree, then ministers must give some assurances that it will be able to negotiate its way out of these expensive contracts if the decision is taken not to renew Trident.

In his statement today, Philip Hammond clearly implies that he believes Trident is necessary for national security – despite the doubts already expressed by some in the military about whether upgrading what is essentially a Cold War nuclear weapons system is the right defence solution for the future.

This insidious attempt to pre-empt Parliament’s decision seriously undermines our democratic system, and sends out a worrying signal to the rest of the world about the UK's commitment to nuclear disarmament.