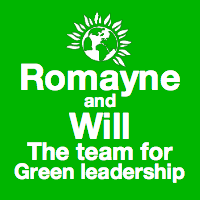 I am pleased to be able to support Romayne Phoenix's election campaign for the leadership of the Green Party and Will Duckworth as her running mate for the deputy leadership.

My endorsement which is on the campaign website HERE reads:


In a time of unprecedented global climate and economic crisis and with the welfare state under sustained attack, the Green Party needs a leader with grit and determination, firmly rooted in campaigns for environmental and social justice. Romayne Phoenix has demonstrated that she is able to forge alliances with other groups and trades unions, communicate across the social spectrum, and inspire all those in struggle. She would make an excellent leader.

Among others endorsing Romayne's campaign are:

Romayne and Will want to position firmly in the anti-austerity movement:


The Green Party must be at the heart of the battle against austerity, becoming centrally involved in anti-cuts campaigns where they already exist and encouraging their formation wherever absent. We must also work towards such campaigns including a Green agenda, for instance seeking to defend and expand public transport provision in localities as part of the fight against public spending cuts.

Our position against austerity remains a fundamental differential between us and the other parties. We must have an effective campaign strategy, led by a dynamic and properly resourced campaigns committee. We should seek to involve trade unions, tenants associations, community organisations and students in broad and inclusive organisations at local level.

Since its creation in 2010 Romayne has chaired the Coalition of Resistance, a broad grouping of organisations and individuals who are building a national and international movement of opposition to cuts, privatisation and the victimisation of the most vulnerable in society. These connections and experience make Romayne and Will ideally placed to build the network needed to secure this alliance.

By becoming more effective allies in their defence of jobs and living standards we might hope to become the party that nurses, teachers and transport workers identify with most.

NOTE: I give this support and endorsement as an individual member of the Green Party. Other members of Brent Green Party may well support other candidates.
Posted by Martin Francis at 13:05:00