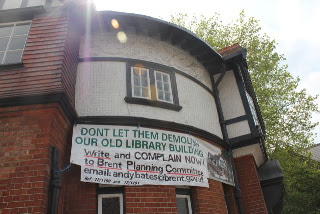 Shortly after being ousted as leader of Brent Council, Cllr Ann John joined the Planning Committee. The Committee will shortly be considering the planning application for the controversial redevelopment of Willesden Green Library Centre, which includes the demolition of the 1980s library and the Victorian library, loss of open space and the Willesden Bookshop's loss of premises, in exchange for a smaller library and the building of more than 90 luxury flats.

As leader and Executive member, Ann John was a keen supporter of the regeneration scheme.

Inevitably campaigners have seen a possible conflict of interest here as the Committee (rather like the infamous case Jeremy Hunt in the SkyB matter) exercises a statutorily independent duty.

In the Willesden and  Brent Times this week Ann John rounded on her critics:


This is a cheap shot from people who just want to have a go at me. I will of course approach any planning application with an open mind and take everything into account and following planning guidelines. Backing the scheme pre-planning is not the same as having a pre-conceived notion about it.  I will be looking from a planning point of view only, as will all the planning officers.

The penultimate sentence in her statement is clearly a matter of semantics but with far-reaching consequences. The Council's Constitution (Codes and Protocols)  LINK indicates that campaigners may have grounds for requesting that Cllr John absent herself from discussion of this particular planning application.

A general principle can be extracted from the guidelines on Scrutiny:

Ann John was a member of the Brent Executive that took the decision top go ahead with the Willesden Green Redevelopment.

The question for Ann John is,  to quote a phrase used in the Codes and Protocols,  whether her previous comments are such that  'a member of the public with  knowledge of the relevant facts would reasonably regard as so significant  that it is likely to prejudice your judgement of the public interest'.

I would argue that campaigners' concerns are not a 'cheap shot' as Ann John claims but a legitimate onjection that should be seriously considered by the Council's legal officers.
Posted by Martin Francis at 12:18:00

'I will be looking from a planning point of view only'
I rest my case!
Surely the impact upon the community, and the wishes of the community; who will have have to 'LIVE WITH THE CONSEQUENCES'; should also to be considered?

So which do people want it to be?

Or planning concerned with "the wishes of the community; who will have have to 'LIVE WITH THE CONSEQUENCES'"?

In fact, Secretary of State Eric Pickles has said that councillors on Planning Committees CAN express personal views, and the committees are less quasi-judicial that they used to be.

Councillors are direct employees of The London Borough of Brent, as are the planning officers who sit in on the meetings to steer the committee.

Councillors on the planning committee have no idea about planning legislation which is why Brent Council planning officers are present. If a planning decision was to be made on planning policy, what is the point of a committee and its expense? Its just a show for you to watch of an evening. All shows have rehearsals.

Ask a transparent Councillor (good luck finding one of those) to show you who deposits their salary into their account. It will show The London Borough of Brent.

Should Ann John participate in Willesden Green planning decision? - NO.

Should The London Borough of Brent have a planning application considered by its employees? - NO.