I have been hearing recently of residents' concerns about the removal of apparently healthy mature trees in the borough. Concerns have been followed up by resident Martin Redston in his local area and his findings are set out below. Clearly, following the recent tragic death caused by a falling branch, LINK the Council has a duty to make sure that trees are safe while also maintaining and increasing the borough's stock of trees.

Following concerns about the cutting down of trees locally I met  Gary Rimmer (Brent Tree Officer) in Park Avenue on Tuesday afternoon for an hour or so. We looked at every tree. He showed me that each tree that had been cut, was actually in poor condition. Most were hollow at the base and one outside no 2 was actually dead. We talked at length and ex- councillor Maloney joined us for a few minutes so he was also given some of the information. 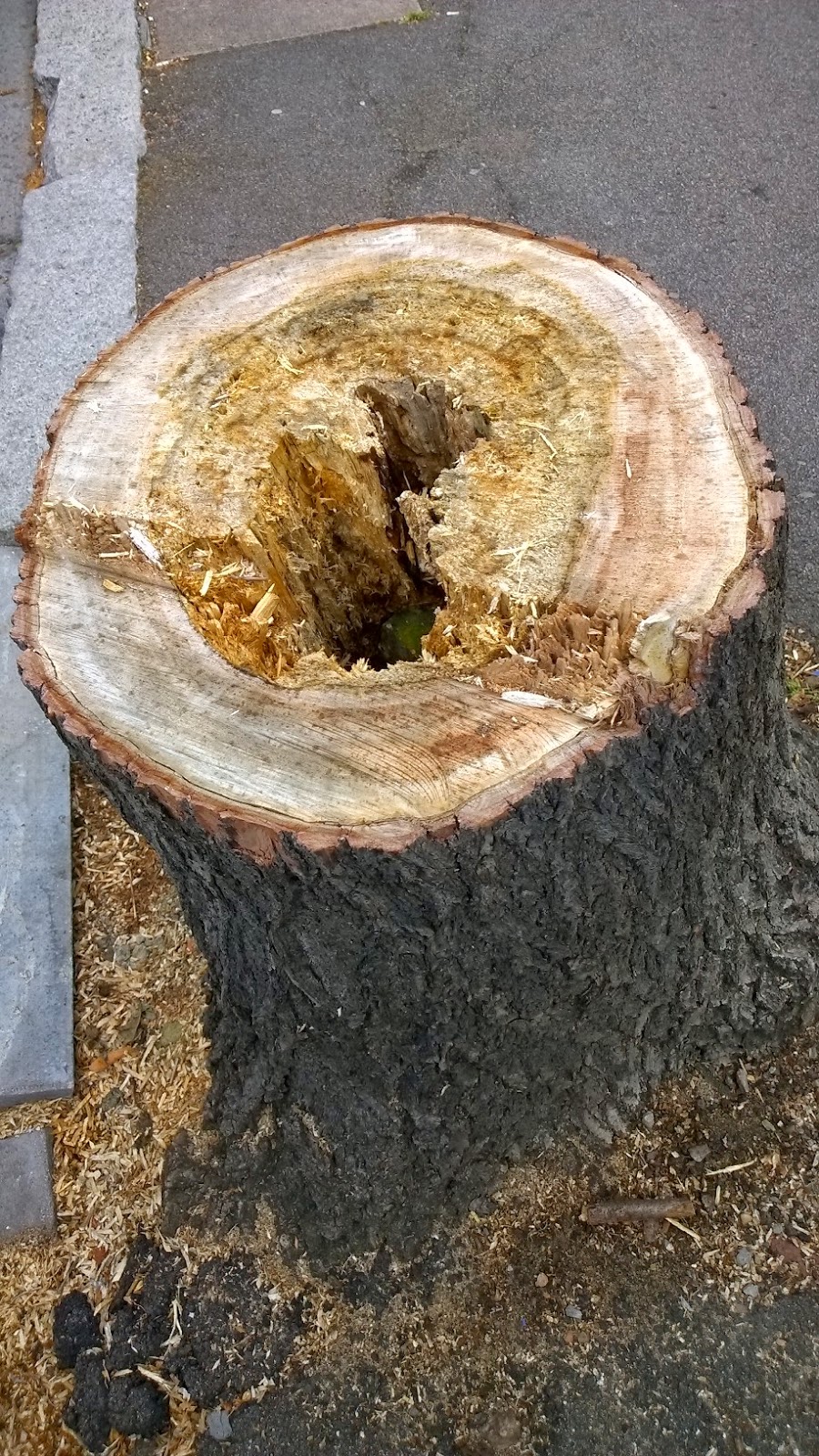 It is my understanding that Brent has an ongoing policy of assessing tree conditions on an area by area basis throughout the borough. Assessment is carried out by a specialist contractor. Assessment is implemented generally by visual assessment and by using a resistograph in some instances.  The most common method of testing is by simply tapping the base of each tree with a plastic mallet.
The methods of Claus Mattheck as noted in the link below are used.
We inspected every tree that had been cut and also some examples of growing trees, in most stump cases I could hear or feel the hollow 'ring' to the wood, it was quite surprising to me how easy it was to identify the anomalies. 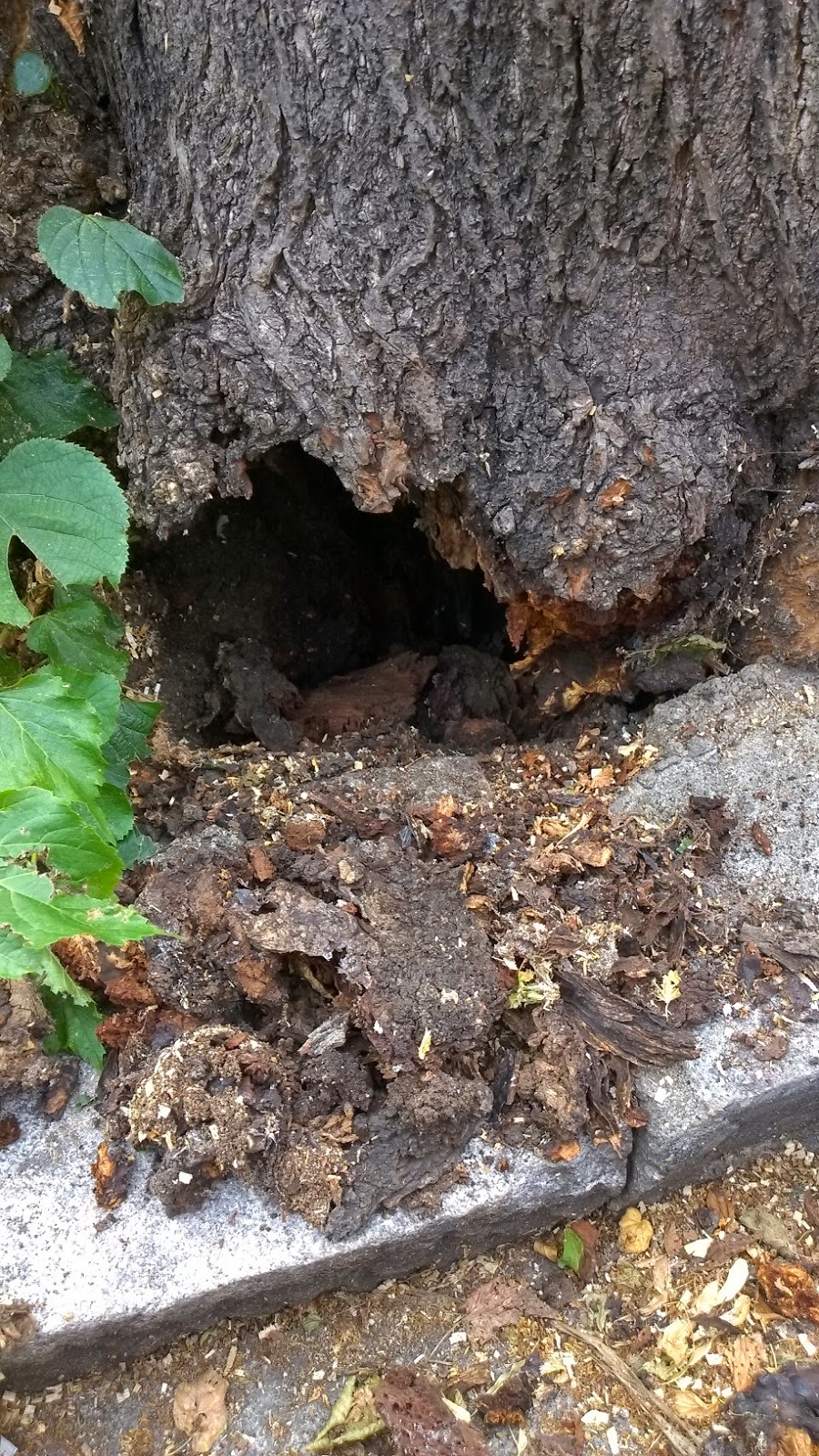 By getting down to ground level, some material at the base could be cleared and the bark was pulled away easily and burrowing into the centre of the tree could be done. Some stumps have a hole right down the middle, these holes may not be terminal to the life of the tree as new growth can occur on the outside leading to strengthening. The central wood feels spongy and loose but unless there is a hollow feel on the outside these trees can survive.
I was not completely convinced about the tree nearest to the railway bridge as I failed to feel the hollowness. I was informed that this tree had been leaning towards the road, but I think that this was inconclusive.
We inspected the chestnut tree that has marking on the leaves. This is due to 'leaf miner' and is not dangerous to the life of the tree.
We discussed the issue of engagement with the community. The original complaint had been from Alverstone Road where trees had been cut down without notice (I understand that residents were asked to moved their cars on the morning of the work). I made the point that the yellow signs would be expected to be displayed a few days before cutting as a warning. Gary stated that the signs did not have the force of law, but I pointed out that residents would at least know what was intended and could ask questions in advance. We also observed evidence that cars were indeed being moved because the 'free' parking space near the bridge was mostly empty as the sign was attached to the adjoining remaining stump. I suggested that the tree department should publicise in the Brent Magazine and on the Brent Website to explain the programme throughout the borough and to demonstrate the types of issues being addressed with the trees. A presentation to each Brent Connects Area Forum would be beneficial.
It has also been suggested to me by others that there should be a clear record of each removed tree in order that residents would be able to find out later what has been happening in their streets.
Finally I aired the question that trees were being cut down to save costs. Although I understand that their budget had been reduced from approx. £900k to about £500k), I have been told that no trees are cut down unless reported to be unhealthy. The reduced budget is apparently managed by reducing and consolidating the number of areas in Brent where works take place.
The following links will provide some background information:
http://www.forestcomms.org/forum/topics/reading-the-language-of-a-tree-claus-mattheck
http://www.bbc.co.uk/news/science-environment-23490686
http://www.jcaac.com/picus.htm
Martin Redston
Posted by Martin Francis at 11:03:00

I've known Gary Rimmer for some years and he's an excellent chap. He fiercely resists felling trees whenever possible - indeed, a couple of my residents got quite grumpy when by him told that trees they felt to be a bit risky were actually perfectly safe. I walked round with him a couple of times and his expertise is superb. Trees are "unpredictable". One local tree fell in last spring's storms, looking perfecttly healthy when the canopy was looked at, but the roots and base had almsot vanished.

We gave some of our ward working money towards replacing vanished trees and I think it represented a wonderful investment. My worry is that the Parks policy has been to conserve wherever possible, including the massive willow that fell in Gladstone Park - with the new Public Realm contract, I'm doubtful this will continue.