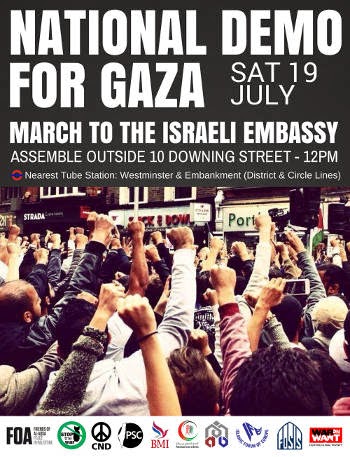 On the eve of the National Demo for Gaza (above) the Green Party has today called for an immediate end of the Israeli attack on Gaza, and for the British government to apply all possible pressure to achieve that end.


With the death toll in Gaza soaring past 250, with many of them civilians, including many children, we need strong international pressure to stop this violence.

Killing hundreds of innocent civilians will worsen Israel’s security, not strengthen it.


An immediate ceasefire is essential, and it must be responsibility of all states and political actors in the region to stop this cycle of outbreaks of conflict.

Green Party MP Caroline Lucas has previously written to the Foreign Secretary to urge him to step up action to secure an end to the latest escalation of violence between Israel and Palestine, and to oppose any attempt by the Israel military to launch a ground attack in Gaza. Lucas has also called on the Government to do more to work towards securing a lasting and just peace in the region, based on a two state solution, and to urgently address ongoing human rights violations:


News of the latest ground offensive is horrific. The International community is compelled to condemn this offensive with a collective voice, to demand an immediate cease fire and to hold Israel accountable for the assault. Violence begets violence – and this cycle of violence must end now.


World governments need to ask themselves some serious questions about their continued inaction and also of the failure of Israel to uphold UN resolutions, every incursion, every new settlement by the State of Israel simply acts as recruitment drive for those in Palestine who can only see resistance through violence. Each rocket launch from Gaza brings a heavier response from Israel, and the cycle of violence continues unchecked. We must bring about a ceasefire and must get talks on a two state solution back on the table.


There are many heartrending tales of tragedy and loss from Gaza. But the damage to al-Wafa rehabilitation hospital is particularly disturbing. Israel needs to be held fully responsible for its use of missiles and artillery in densely populated civilian areas.

We need to not only see an immediate end to the current violence, but a renewed commitment to negotiating towards a peaceful, lasting two-state solution.