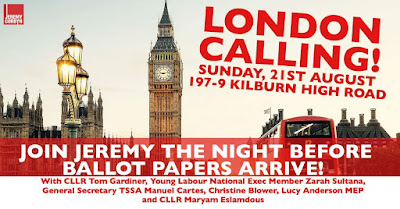 Some local Labour Party members complained to me last week that they were 'always the last to know' about Labour events in Brent - Wembley Matters often knows before them.

It does seem that Sadiq Khan's PR visit to South Kilburn, to sing the praises of Brent Council's housing and regeneration programme, was kept under wraps - perhaps to avoid any embarrassing interventions by local residents (see Kilburn Times Letters page this week).  Jeremy Corbyn's visit to the Rauch City Church (the former Gaumont Cinema) in Kilburn High Road this evening was only a rumour until a few days ago.

It is perhaps fitting, given some of the more over the top declarations of support for JC, that tonight's event is being held in a place of worship.

Brent Council leader Muhammed Butt has always been close to Khan, at one time there was even a wild rumour that he might land a City Hall job, but he has not joined the Labour List LINK group of councillors backing Owen Smith.

Given their closeness he may have known about Khan's intention to come out in support of Owen Smith in today's Observer.

These are our local councillors who are supporting Smith: 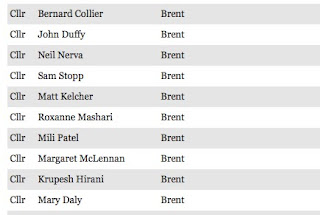 The list of councillor supporters of Corbyn is rather harder to access as it is in no particular order but Cllrs Claudia Hector and Rita Conneely are on the list. A year ago Cllrs Tom Miller and Abdi Aden signed upto support Corbyn.

I am happy to update these lists if any councillor wants to be added.

Sadiq Khan is a waste of space and oxygen.

A Corbyn-led Labour party represents the beginning of the end of more than 35 years of unfettered capital accumulation - under the Conservatives and New Labour - by a very small and highly privileged class, that prefers terms like 're-nationalisation' and 'national bank' to remain firmly rooted in the relative safety of the chattering classes.

The possibility of these sorts of concepts being afforded a higher political profile than is absolutely necessary, is itself abhorrent to this tiny minority of the supra-wealthy, whose elements infest key points in the various power-structures that exercise control over this country, and, indeed, over many countries

So the danger is not that the Labour party is unelectable under Corbyn. The danger is to the establishment, and is that, under the popular ideas esposused by Corbyn, the Labour party, having shaken off its New Labour and Blairite residues, will win an election with a landslide that will make '97 look like a photo-finish.

And at the end of that process, Sadiq Khan will remain unchanged as a waste of space and oxygen...

spot on about sadiq khan!

Those within the Labour Party -- especially Labour MPs -- who declare that a Corbyn-led Labour Party would lack 'electoral credibility' arguably bear contempt for the many Labour Party members who voted for Corbyn in the 2015 Labour Leadership elections. Arguably, they are counting more on the funding of John Mills and the JMLDirect call-centre's telephone canvassing services than on activists.