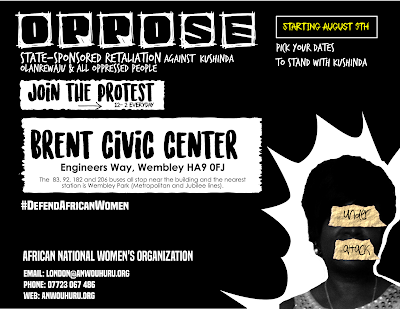 Visitors to Brent Civic Centre and Wembley Library are likely to see daily protests from tomorrow until the end of the month.

The protests are organised by the African National Women's Organisation who explain the background here:


We are asking for your assistance to help support and raise up the story of Kushinda Olanrewaju (aka Shirley Campbell) who is the mother of learning-disabled man, Meshach Boland who has been targeted by police for years.

After a May 11th protest outside Willesden Magistrate’s Court in London’s Borough of Brent and pressure from the African National Women’s Organisation and its supporters, his case hearing was postponed until September of 2016 pending an updated education psychologist report.

What followed next was a string of retaliatory tactics from the London Borough of Brent,  where they moved to  revoke Kushinda’s assistance and benefits, which are vital for her as the mother and a full-time  carer for her learning-disabled son and her elderly ailing mother. They have also attempted to forcibly evict Kushinda from her home as well as levied her with illegitimate council taxes.

The African National Woman’s Organisation understands this treatment as targeted state violence against Kushinda and Meshach, born under a colonialist government system set up to fail and then jail poor and working class Africans. Meshach’s incarceration poses as a better investment to law enforcement than the adult social care set up to support him.

Starting August 9 @ 12-2 in front of Brent Civic Centre, Kushinda Olanrewaju will stand in daily protest over the treatment she and her son have received at the hands of the state. If we do not bring to light Kushinda’s detrimental mistreatment by the state and hold the council representatives accountable to their own policies––which ensure that the most vulnerable of us will be guaranteed services and proper consideration in legal proceedings ––then we unwittingly agree with their cavalier decision making, which only seems to change when African people are involved.

Learn more about this issue: http://anwouhuru.org/tag/meshach/