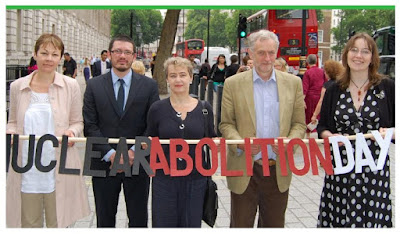 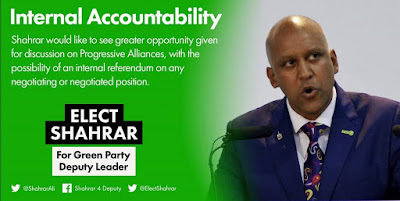 In an earlier posting LINK I wrote about some of the underlying issues that had emerged during the Green Party internal elections campaign. (Voting closed yesetrday) One of these was the 'Progressive Alliance' and misgivings about the way this strategy has emerged have now become the subject of an Emergency Motion to the party conference which begins on September 2nd.

As with all emergency resolutions priority is decided by the number of signatories.

The recent political climate, combined with the long-term struggle to achieve proportional representation, has highlighted the need for decisive, cross-party action to demand electoral reform and give the country the best chance of a representative, accountable government. However, ongoing issues with other parties have exposed and intensified hostilities in some areas, and therefore any political strategy proposed by the Green Party of England and Wales which resembles an alliance must be developed both in close consultation with members and local parties, and taking into account issues which would create barriers when putting such an alliance into practice.

It is felt by many that discussions around this so far have taken place without due transparency, and are tantamount to the leadership team and key elected representatives creating policy outside of the democratically mandated member-led process.

Conference instructs GPEx to assemble a working group to carry out a comprehensive, initial consultation with individual members, local parties, and member groups before the idea of a Progressive Alliance is developed any further; and that the responses are used to inform the terms of such an alliance should it become a realistic direction for the party’s future political strategy.

Conference notes: Once an arrangement is proposed, it must be supported by GPEx, and put to GPRC for agreement on behalf of the party, as per Section 11, clause (v) of the Constitution.

Green Party members who wish to support this motion should copy and paste this, signed with their name and local party, to soc@greenparty.org.uk

Meanwhile in an interview with the BBC today LINK Caroline Lucas reiterated her support for an electoral alliance but stressed that was her personal view and ultimately the party had to decide:


In a sign of the determination by the Greens' only MP to boost the party's presence in Parliament, Ms Lucas told the BBC she wants "all the options on the table" when it comes to the possibility of talking to other parties before the next general election.

It doesn't make sense for parties of the left to be constantly fighting each other and meanwhile the Conservatives come through and we've seen that time after time in the 2015 general election.

I think what we are looking at is those marginal constituencies where some kind of agreement between progressive parties might be able to make a difference.

Asked whether this meant she was prepared to see a Green candidate drop out of a constituency race so long as Labour did the same elsewhere, the MP for Brighton Pavilion said: "Personally I would".

Such a pact could be designed to prevent the "left" vote being split between Labour and the Greens in some constituencies, allowing Ms Lucas' party to target certain seats while offering Labour a clear run elsewhere without Green opposition.

She stressed it was ultimately for the party to decide on what was her personal view on the issue.

I caution against excessive tribalism. Progressive Alliance vs tribalism as an aid to democracy?

In retrospect, maybe I 'over-egged the pudding' in stating that the idea of a Progressive Alliance inspires A LOT OF tribalism WITHIN GREEN LEFT MEMBERS AND GREEN PARTY ACTIVISTS.

Charles Gates'reference to progressive alliance as an EVIL DEAD Alliance — cited on London Green Left blog — epitomises what I was saying about tribalism.

Presenting the concept of a progressive alliance can be a way of calling other parties' bluff, especially in constituencies where prospective participant parties have, say, behaved as regressive alliances as in the case of Labour councillors siding with Conservatives in Brighton & Hove in the days of a Green Party led council with no overall majority, or in areas where Labour has been a one-party state and forced people on state benefits to pay an element of Council Tax when those state benefits are too low to be taxed.

PS: It seems that arousing controversy can be a means of inciting comments.

Yet as a Green Party member too poor to attend party conference and very restricted by the agendas of DWP regarding how much money the law says I need to live on and what I need to declare, and the timetabling of Green Party of England & Wales Conference Arrangements Committee etc, as well as my health and disability matters in a heat wave, I hope the Green Party Autumn Conference discussions about 'progressive alliance' politics do not entirely overwhelm matters of how nasty 'austerity government' is to poor people. UK benefit cap, party conference season, BBC, Russia and hegemony