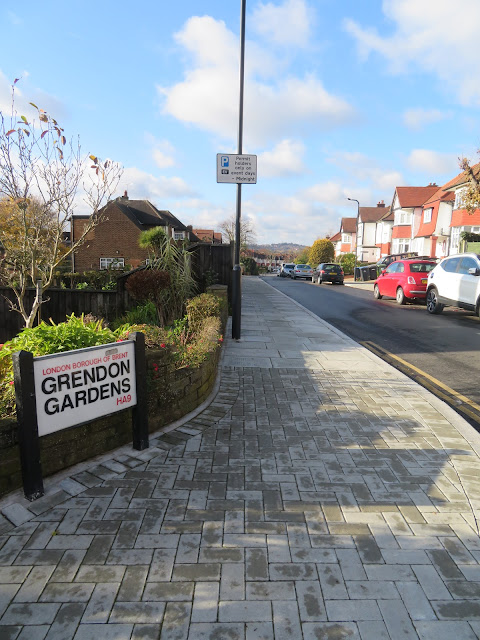 Residents in Dartmouth Road have taken on Brent Council over the proposed asphalting of their footway LINK. They claim that while there are strict rules involving the protection of their Conservation Area regarding changes to their properties, Brent Council is ignoring the spirit of such legislation in its plans to replace paving with asphalt.

The policy was challenged three years ago over the asphalting of Chandos Road with a petition launched on 38 degrees. LINK

There are, I understand, now getting on for 150 signatories on the Dartmouth Road petition to the council opposing the action and the operation which was due to start today has been suspended for a week.

Meanwhile the image above shows Grendon Gardens in the Barn Hill Conservation Area which was re-paved with brick blocks and paving stones after the asphalting policy was introduced.  When I tweeted a photograph of the work at the time someone suggested a Brent councillor must live in the street - I am sure that is not true but residents are looking for consistency in Council policy.
Posted by Martin Francis at 14:49:00