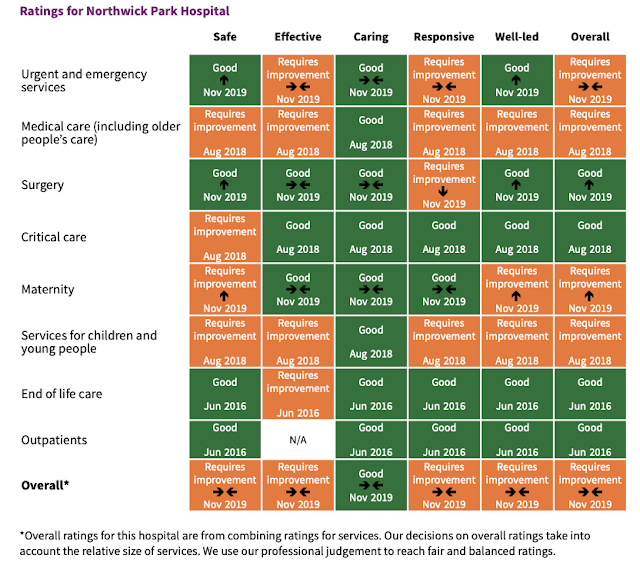 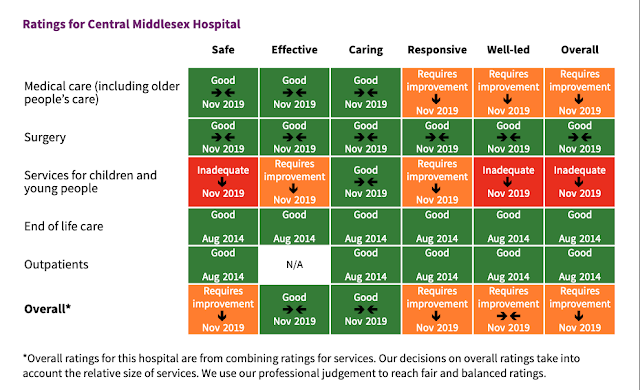 Of most concern will be the red light 'Inadequate rating' for three areas of Services for Children and Young People at Central Middlesex Hospital.

·       Governance in children and young people services at Central Middlesex Hospital was weak. The risk register for the recovery ward was out of date. There was a lack of up to date policies and associated audits demonstrating that the care being delivered was compliant [with] national standards and best practice. We were not assured that the service was guided or supported via a paediatric surgical network.

·       There was no clear evidence that areas from the last inspection for children and young people services had been addressed or necessary improvements made.

·       In medical care, risks were mitigated and managed but there had been limited action to address risks directly.

·       The senior leadership team for medical care at Central Middlesex Hospital recognised the sometimes poor relationship between its staff and local authority staff, but there had been no action to address this


There were many issues regarding safety. The report says:

·       Our rating of safe stayed the same. We rated it as requires improvement because:

·       The trust provided mandatory training in key skills however there was some confusion among midwifery staff as to the correct length of mandatory training and its content. Compliance rates for mandatory training and safeguarding training were below trust targets in the surgical services at Northwick Park Hospital and Central Middlesex Hospital. Not all clinical staff in children and young people services at Central Middlesex Hospital caring for children were trained to safeguarding level three however, plans were in place to ensure all staff received this training.

·       In medical care at Central Middlesex Hospital, some staff did not always report incidents and, in particular, near misses.

·       The trust did not always control infection risk well. Hand hygiene was not consistently being undertaken in maternity services. In children and young people services, the Rainbow Unit at Central Middlesex Hospital was found to be untidy and we could not be assured that children’s toys were regularly cleaned.

·       Due to capacity issues in the emergency department at Northwick Park Hospital, patients were still being cared for on trolleys in the corridor which meant private conversations could be overheard.

·       At our last inspection we found that the clinical decisions unit (CDU) was being used inappropriately to treat level two patients. Whilst the service assured us that this was no longer the case we did find that the area was being used as overflow for patients requiring inpatient beds and patients within the CDU could be there for over four hours and sometimes up to three days. In children and young people services at Central Middlesex Hospital, staff we spoke with in Recovery Stage One told us that children were cared for in a mixed four bedded recovery bay with adults.

·       Staff at Central Middlesex Hospital did not use a nationally recognised tool to identify deteriorating patients, such as Paediatric Early Warning Signs (PEWS) or a validated acuity score system to assess patients. We were told that not all medical staff had European Paediatric Life Support (EPLS) or Advanced Paediatric Life Support (APLS) training. There was no paediatrician available on-site at Central Middlesex Hospital. Staff had to refer to the consultant of the day or week, who was based at a different hospital in the trust. Some staff were not aware of this arrangement.

·       Some medicine storage areas did not meet national guidance for security for controlled drugs in the Northwick Park surgical service.


• Mandatory training compliance rates at Northwick Park and Ealing emergency departments had improved. Staff monitored patients who were at risk of deteriorating appropriately.


In Urgent and emergency care at Northwick Park Hospital-

The department had developed a patient sepsis video for parents whose children attend the paediatric emergency department with a fever or suspected infection. The video was a four minute video aiming to educate parents about the warning signs to look out for sepsis.

The department had done a rotational shift with the local mental health trust. The purpose of this was for staff to get an ideas how the other service was run, learn and share knowledge and understanding to improve the way they worked together.