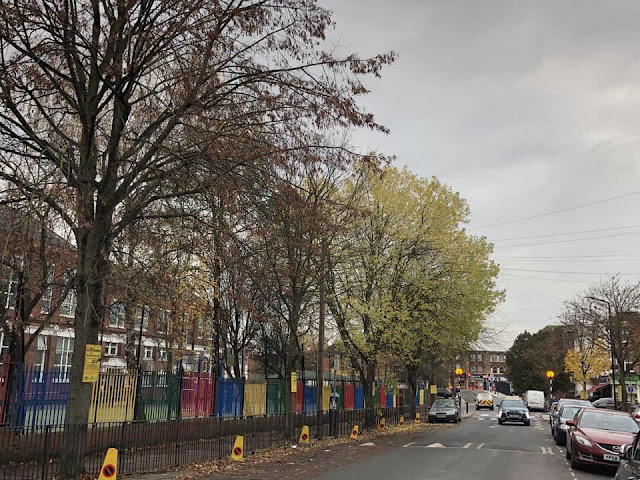 Brent Council's consultation on climate change actions closes today (make a last minute submission HERE) and unfortunately it coincides with what appears to be an act of environmental vandalism by the Council.

Residents report that the Council is to remove 8 mature trees on Furness Road, Harlesden, 5 of which are outside Furness Primary School.

Apparently the removal is due to a 'pavement renewal project'  which suggests confusion over priorities when the Council recently declared a Climate Emergency.

Elsewhere local authorities are recognising the importance of trees in combatting air pollution and climate change and some are encouraging schools to plant trees in their grounds and on the playground perimeter.


This is the response one resident got from Cllr Krupa Sheth, lead member for the environment:

I nor the council want to remove trees unless they absolutely need to be removed. Yes if there are issues where we would be liable for insurance claims then we do have to remove the trees as the insurance pay outs worth thousand of pounds from the council’s already diminishing budget would not be the wisest choice for the residents nor the council.
We do our best to look after and preserve our trees and are constantly looking for funding including Brent’s CIL funding to plant more trees as well.

Cllr Sheth said that she would get back to the resident but nothing further has been heard. Meanwhile the removal signs have gone up.

The removal of the trees is due to start tomorrow - is there time for a last minute attempt at saving them?
Posted by Martin Francis at 16:19:00

Brent Council must be on another planet along with their Councillors. Those trees are helping to filter pollution and noise for the pupils of the school and yet a "pavement renewal project" takes precedence over children's health. Unbelievable. A call to Local
residents.....park your cars along the road by the trees and block the tree work. How strange that the Council has money to spend on "pavement renewal" and removal of healthy trees and yet can't repair sections of severely damaged footpaths in other areas of the Borough due to so called " lack of funds."