UPDATED: 999: Join the battle to save Wembley Ambulance Station from imminent closure 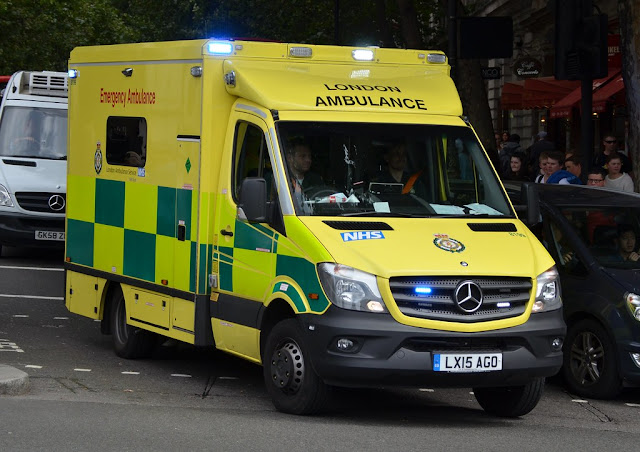 This closure will leave a gulf in-between Kenton and Wembley that will be substantial, especially on event days. This gulf will also be impacted by the closure of Greenford, Ruislip, and Hayes ambulance stations, meaning the distance and time to get to critically ill patients will increase within the North of London area.

The closure would occur in  the middle of a pandemic at a time of peak winter illness and falls, in a multi-racial community suffering from disproportionate numbers of Covid19 cases. A resource is being taken away from an area with a rapidly growing population as the result of high-rise developments In Alperton, Wembley Central and Wembley Park – areas close to the ambulance station.

Unison sets out its concerns:

1.We are concerned that Brent has one of the fastest growing populations in London, with a significant projected change in population in the two largest developments closest to Wembley Ambulance station will increase the population in the area by an average of 129%.

Additionally, the borough’s population is projected to continue to grow by an expected 25%. This population explosion is greater than any other London borough.

These figures are compounded by the fact that the electoral ward is ranked 7th out of 317 in London for size and density of the population and sits high as one of the most deprived areas of London. Meaning that timely access to health care is paramount, which Wembley’s current location offers to our community.

The service believes that the impact of removing Wembley ambulance station will be minimal but I feel that they have not factored in the other surrounding station closures or the significant growth of the borough of Brent but also its surrounding boroughs.

2. Health & Social Care Act (2012), states that there is a requirement to consult the local community before the proposed withdrawal of NHS services:

·         Reduce inequalities between patients with respect to the outcomes achieved for them.

The Health & Social Care Act (2012) places a requirement upon the London Ambulance Service NHS trust in engage with the communities it serves.

It is vital that the service is intelligence and evidence led when commissioning services to meet the needs of the communities. Currently we have not directly involved our local community and allowed them to directly influence our day-to-day work. This engagement needs to  be relevant and reflective of the population and based on up-to-date information from the trust and stakeholder’s and partners.

The current policy also fails to meet the Public Sector Equality Duty of the Equality Act (2010), particularly in relation to Equality Delivery System (EDS2). The London Ambulance Service is failing to attain equality of care whilst not meeting an individual’s human rights goals. These goals include, but not limited to:

To make EDS2 work, it is extremely important that the community is involved in any process, thus ensuring that we meet the needs of groups that have “protected characteristics”.

The removal of Wembley ambulance station denies the community a timely access to care thus tarnishing the patient experience and their impression of the London Ambulance service within the communities we serve. Especially with the closure of the surrounding stations.

3. The initial move of staff to Kenton was to aid the services response to the pandemic, we fully supported the service in this with the expectation that all staff would be returned to Wembley station one pressure on the service reduces.

We accept that the service should remain in a ‘state of readiness’. However, we have already proved our flexibility and ‘agility’ and that we can re-consolidate ‘overnight’ if the service becomes under significant pressure again due to a) increasing numbers of seriously ill patients and b) impact on resourcing due to high staff absences.

However, things have changed over the past weeks and with the service seemingly attempting to speed up the estate consolidation process with a flagrant disregard to how this will impact on the staff members or the communities we serve.

Wembley station is fully serviceable and has passed all Health & Safety inspections, meeting the Government Covid compliance requirements which would ease the overcrowding concerns by consolidation of stations on the group.

To oppose the closure please write to your local Brent MP, spread the information via social media and feedback to the ambulance service with your views https://www.londonambulance.nhs.uk/talking-with-us/enquiries-feedback-complaints/

Cllr Ketan Sheth, Chair of Brent Council Scrutiny Committee, tweeted a comitment to scrutinise the decision shortly after details were pub lished in the Kilburn Times. He is concerned about the lack of consultaion with local people and councillors. 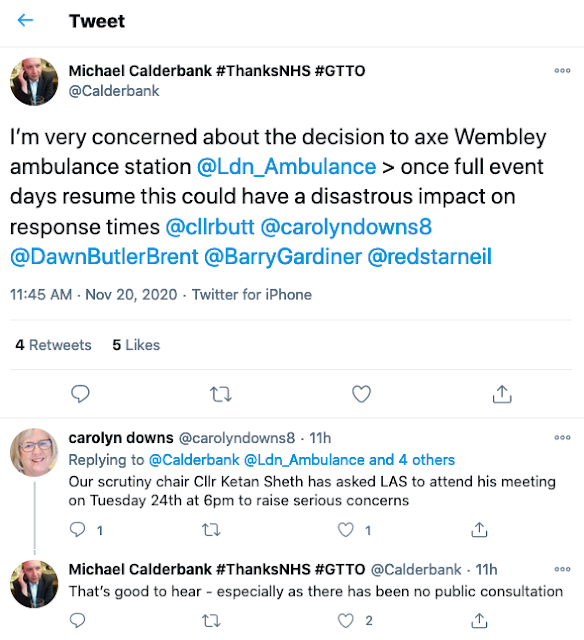 Note:  Carolyn Downs is the Chief Executive of Brent Council

Advocates of the closure proposal are arguing that Wembley has been operating for a while from Kenton during Covid19 and the arrangement has worked well without any impact on  efficiency and call-out times. Having them all at one base to prepare the vehicles for the shift has proved beneficial. Vehicles do not normally return to base but go from job to job from dispersed positions. Wembley has been subject to flooding and the landlord wants to surrender the lease in December.

The people of Wembley deserve a dedicated Ambulance station and have benefited from it presence for over 45 years on its current site.The ongoing growth in the Borough and the further closure of Ambulance Stations neighbouring Wembley will leave large gaps in cover and could increase waiting times for the most seriously unwell patients.

There was an escape of water in the station. The station has been inspected and no H&S concerns have been raised and still has the ability to re open and be fully operational.
We are ready to return and continue to serve our local community.
The move of Wembley to Kenton was meant to be a temporary measure to help the service in its fight against Covid-19,which we fully supported.
This threat has not gone away and all NHS staff are still fighting!
The staff are rightly proud to deliver high quality care in such difficult times.
It is obvious that the impact has not been felt in efficiency and call times, as l suspect that this is a direct result of the  country being in lock down!
Once life returns to normal and we can all attend concerts, football matches and enjoy a meal out the entire Wembley area will be back to normal, gridlocked with thousands of people in the area on event days! I would imagine the impact of closing Ambulance stations will then be felt by the patients and the public alike.
The Ambulance Service has elected to close the station before the lease is up in April 2021 and are yet to provide any evidence that the landlord wants the station off the land.
The Mayor of Brent fully supports the re-opening of Wembley Ambulance station as do community groups.