While local history is often just local places, I thought it would be good to write about people, who lived locally in the past, and who made a major contribution. This is a story of a famous inventor who made his home in Sudbury. He made a discovery that propelled the development of chemistry – but he is now largely unknown.

William Henry Perkin was born on 12 March 1838 at King David Lane, Upper Shadwell, East London. He was baptised in St Paul’s Church – a small church with a tall spire built in 1669 after the fire of London. His early home was demolished a long time ago, but a plaque commemorates the site of his birth and his first experiments. 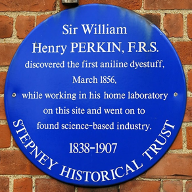 1. The blue plaque to William Perkin in Shadwell. (Image from the internet)

His father ran a successful carpentry business employing 12 men and the family was reasonably well off. Shadwell at the time was a crowded mixture of slums and artisan tradesmen. Their middle-class status did not prevent the impact of poverty-based diseases that were all around them and William lost both his eldest sister and a brother to tuberculosis. William attended a private school near his home, and had lots of hobbies including photography. At the age of 14 he got all dressed up and took his own photo, seen here. 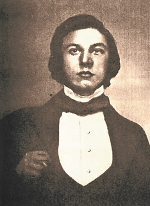 2. The self-portrait photograph that William Perkin took, aged 14. (From “Mauve” by Simon Garfield)

Like most young people, he had no idea what career he might follow, thinking at first that he would follow in his father’s footsteps and become a carpenter. For a while he had ambitions to become an artist or possibly a musician, as he learned to play the violin and double bass. When he was around 13 a friend showed him some simple experiments with crystals and he became attracted by chemistry and the idea of making discoveries.

Aged 13, William joined the City of London School not far from St Paul’s. The school offered lessons in chemistry, taught during the lunch hour twice a week, and cost his father an extra 7 shillings (35p in decimal currency) per week. Thomas Hall, the visiting master in charge of the lessons noticed William’s interest and made him a helper with his experiments. By this time his father agreed to build a small chemistry laboratory for William in their home, although George Perkin wanted his son to become an architect, like his brother.

William also attended chemistry talks given by Henry Letheby at the London Hospital and lectures by Michael Faraday at the Royal Institution. Chemistry then was looked down on as a serious science in Britain, but owing to Faraday’s efforts, with support from Albert, the Prince Consort (a German), the Royal College of Chemistry was founded by private subscription. The first Director of the new College was also a German – August Wilhelm von Hofmann. In 1853, at the age of 15, William enrolled at the Royal College, although it took a number of interviews with Hofmann before his father was convinced.

The streets of London were at the time lit by gas light. The gas was derived by distillation of coal but the process created great many unwanted by products – one being a large amount of oily tar. Tar was regarded as waste and there was a problem of how to get rid of it, and all the other by-products including sulphur. Chucking it down the drains or into rivers was one environmentally unfriendly solution. Chemistry was still in its infancy, but it was known that coal tar consisted of carbon, oxygen, hydrogen, nitrogen and sulphur.

Professor Hofmann was interested in a substance called aniline. He was keen to create quinine which at the time was the only effective treatment for malaria, then still prevalent in large parts of Europe and quite rampant in parts of England. Britain regarded malaria as the greatest obstacle to more colonisation, and the link with mosquitoes had not yet been established. Quinine was obtained from cinchona bark but was in limited supply and therefore very expensive. William understood the importance of this research and was ambitious enough to try to help find the solution. He did this by undertaking experiments in his makeshift home laboratory – without running water or gas supply.

3. A vial of Perkin's original Mauveine, and a sample of his dyed silk. (Images from the internet)

William Perkin had an inquisitive mind and one of his experiments produced a black powder, which when digested with spirits of wine gave a mauve dye. He stained a piece of silk cloth and found that it did not fade with washing or prolonged exposure to light. But what next? He was just 18, and knew nothing of manufacturing processes. With the help of his brother Thomas, William produced a larger quantity of his new dye and sent a sample to Robert Pullar in Scotland who had recently been appointed as dye maker to Queen Victoria. He received an encouraging response, and in August 1856 Perkin obtained a patent for his discovery.

Although William wanted to concentrate on research, he hoped that making a living from manufacturing would be a means to that end. As investors were impossible to find for such a new industry, it was his own father who decided to risk all his assets to help finance the project. In the mean-time, samples produced using the new colour were tested and “were well received by the ladies”.

As getting a suitable factory site in Shadwell seemed impossible, a ‘meadow’ close to the Grand Junction Canal was found. The six-acre Oldfield Lane site, at Greenford Green near Harrow, was purchased from the owner of the canal-side Black Horse pub. Construction started in June 1857, and despite having to design his own manufacturing process and find sufficient quantities of base material, the factory was built and started producing within six months. 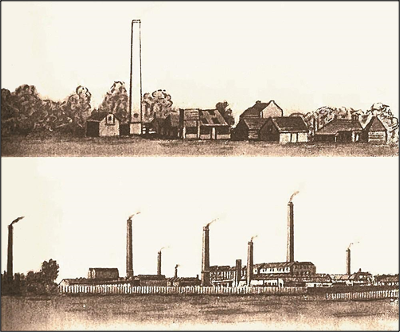 In 1858, Perkin had his application for a French patent refused, because he applied too late and a French dye works copied his process. He felt that all was lost – only for his good fortune to be revived by Queen Victoria who wore mauve to her daughter’s wedding, while the Empress Eugenie, at the time the most influential woman in the world of fashion, decided that mauve matched the colour of her eyes. Paris went crazy for mauve, and the rest of the world followed. 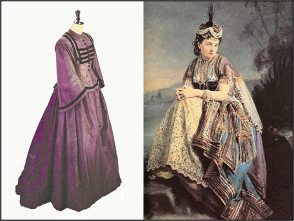 5. A mauve Victorian dress, and the Empress Eugenie displaying her fashion style. (From the internet)

To take advantage of the craze William improved the dyeing methods and devised new ones so the dyes could be applied to calico and paper. Demand grew exponentially and with it his personal wealth. Mauve was the height of fashion for about two years and then the time had come for new colours as the fashion industry took off.

In 1859, William married his first cousin, Jemima Lisset, and the couple moved to rented accommodation in Harrow Road, Sudbury (one of the villas between Nos. 797 and 807). Their first son William Henry (junior) was born a year later followed by a second son, Arthur George, a year after that. They moved from rented accommodation to a house of their own, Seymour Villa, also on Harrow Road, which included room for a small laboratory.

William continued to keep busy running his factory and inventing new colours, including Britannia Violet and Perkin’s Green. He had plenty of competition from others in the UK, but also in France and Germany, as chemists were keen to create new colours to feed the never-ending demand. Perkin also continued with his experiments, and did find a way of improving the dyeing of wallpapers, but also spent time writing scientific papers. Some of the dyes he invented were used to colour postage stamps, including the original mauve from 1881 until withdrawn after Queen Victoria’s death in 1901. 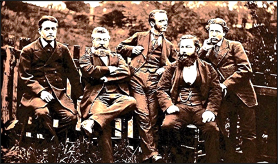 6. William Perkin (second right) and his brother Thomas (centre) with colleagues at Greenford, c.1870.
(From “Mauve” by Simon Garfield)

In 1869 a new colour (alizarin, a red dye) which William had created was all the rage, and made great profits. By the early 1870s Perkin had personal wealth of £100,000, a very rich man by Victorian standards. He sold his factory, which he regarded as too small to compete with the large German concerns, in 1873. He’d also had enough of constant legal battles to protect his patents. The sale became acrimonious, but fortunately the Perkin brothers won the court case.

William’s first wife had died of tuberculosis in 1862 and his father died in 1864. In 1866 he married for the second time. His new bride was Alexandrine Caroline Mollwo, the daughter of a neighbouring family originally from Poland, and the wedding took place at St John’s Church, Wembley. They had 3 daughters, Sasha, Lucy and Nellie, and one son, Frederick. 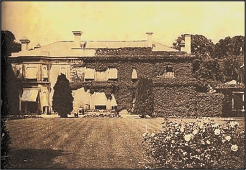 In 1874, and retired from industry at the age of 36, William built a new home called The Chestnuts, next door to Seymour Villa in Harrow Road, and converted his old house into a large laboratory. Between 1874 and his death in 1907 he published 60 scientific papers dealing with magnetic rotary power and molecular architecture of various chemical compounds. 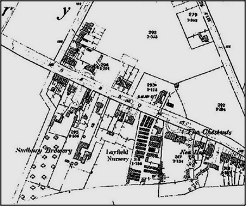 8. The Chestnuts and New Hall on an extract from an 1895 O.S. map. (Source: Brent Archives map collection)

William was an active Christian, and made a large cart shed near his house available for services, as there was then no church in Sudbury village. He bought some land and buildings on the other side of The Chestnuts, which had belonged to the former Sudbury racecourse. There, in 1878, he built the New Hall, designed for use as both a church and village hall. 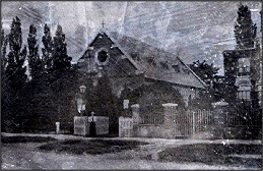 9. The New Hall, Harrow Road, Sudbury, c.1900. (From a slide in the Wembley History Society Collection) 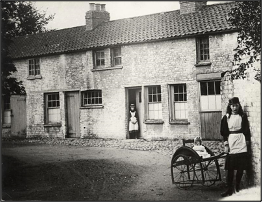