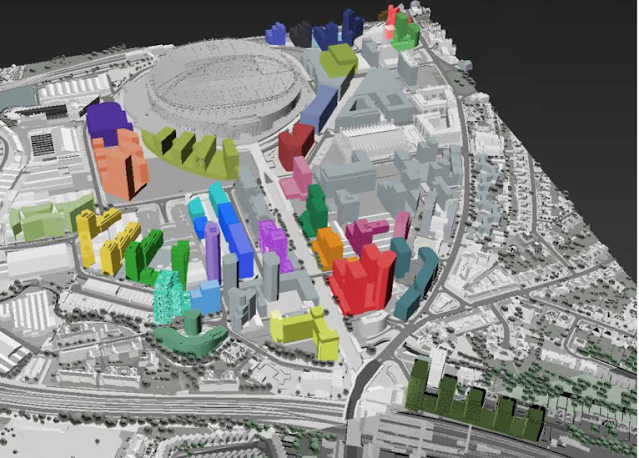 The Wembley Park Station car park application is the 5 dark green blocks at the bottom right of the image. Planning Officers claimed that they were part of the overall Wembley Park high-rise area rather than the suburban area in which their own image shows they are clearly situated. The railway line, Bridge Road and Empire Way form a physical enclosure and boundary of the high rise area around the stadium.

Brent Planning Committee tonight approved the planning application for the Wembley Park Station car park which will see the construction of 5 tower blocks on Brook Avenue.

Philip Grant made a powerful presention on the Brook Avenue - Wembley Park station planning application this evening demonstrating how it breached Brent Council's own planning policies.  Nevertheless the Planning Committee went ahead and approved the application with only one vote, that of Cllr Maurice, against.

This is what Philip said:

Paragraphs 44 to 52 of the Officers Report give a confused view of Brent’s planning policy on tall buildings for this site. I will explain those policies clearly, using the objectors’ document supplied to you.

The current policy, on page 1, is WEM 5, in the Wembley Area Action Plan, adopted by the Council in 2015. This says that ‘Tall buildings will be acceptable in a limited number of locations within the AAP area.’

At page 2, you can see the locations on the Tall Buildings Strategy map. The station car park is in the red area – ‘Sites inappropriate for Tall Buildings’.

There was a specific site called “Wembley Park Station Car Park” in that Action Plan. This was the site where Matthews Close was built, with blocks between 5 and 8 storeys high - a scale identified as suitable for this mainly residential area.

The Brent Design Guide, SPD1, adopted in November 2018, is another policy covering this application. Under Principle 3.1 it states: ‘Tall buildings will only be encouraged in areas identified as appropriate for tall buildings.’

The Officers Report says that you should be guided by Brent’s emerging Local Plan. The 2015 Wembley AAP policies still take precedence within that Plan, subject to any locally specific details.

The Station Car Park is a specific site, BCSA7, in that Local Plan. If you look at the copy provided on page 4, you’ll see that this application’s southern site has an indicative capacity for 300 homes, and that: ‘Up to ten storeys will be considered acceptable to the western side of the site, stepping up slightly directly adjacent to the station.’

Those are the planning policies on which you should decide this matter.

Committee members, please don’t allow yourselves to be fooled into accepting an application which doesn’t comply with the policies adopted by Brent Council, after consultation with its residents.

This application is a flagrant breach of those policies, and you can, and should, refuse it on those grounds.

Cllr Kennelly, councillor for the relevant ward, Preston, and soon to be on the Planning Committee himself, made a neutral presentation. He thought that the development wasn't in keeping with the local area, it fell outside the designated tall buildings area, the tallest was nearly three times as tall as the existing tallest building in  the road, and that the attempt to make up deficiencies in amenity space meant provision of balconies facing each other that would impact on privacy.  He welcomes the provision of affordable housing but said that shared ownership would not have been his choice. Answering a question from the Committee he said that a CPZ might alleviate parking issues but would be a long-term cost to local residents, even if initially funded by the developer.

Cllr Liz Dixon, a member of the Commitee said that Philip Grant's presentation had been well articulated but asked what he thought the damage would be to the area. He replsed that the height of the blocks would overshadow neighbouring properties and cut out the light of new homes that were only built a few years ago. It was over-development and breached policy that was the result of public consultation.

Cllr Kansagra said it was wrong that the Council spent so much time on the Wembley Area Action Plan only to ignore it. He said that the developer had bribed Brent Council with flats.  He went on to complain more broadly that Brent Council had £126m of CIL and Section 106 money unspent in its coffers. Covid had taught us that space is important - the development was too dense with little amenity space. 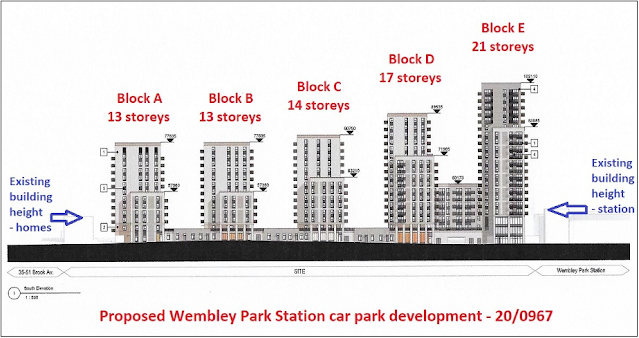 Planning Officer David Glover took me aback when he remarked, 'We are not saying that that 21 storeys is slightly above 10 storeys.' He went on to argue that there would be a loss of viability and thus of affordable homes, if the propsed blocks were lower in height.

Another Planning Officer made my jaw drop when responding to the issue of Covid in high density developments, he said Covid would be gone by the summer and we don't have to worry about it.

There was a very long discussion led by Cllr Maurice on the amount of car parking available in the road that he claimed was already over-parked and would be hit by many of the up to 900 additional residents in a supposedly car-free development seeking a parking space. In addition the 80 or so people who used the station car park would be looking for parking space in the nearby streets.  There will some disabled parking in the development and spaces for transport personnel who drive in  before the trains start running and drive home after the last trains.  There was debate over the extent to which a CPZ would just displace competition for parking to streets further afield. Residents on Twitter testified to how in normal times the station car park was full by 8am, contrary to planners claim that it was underused.

The Planning Committee is not supposed to be political but the only dissent when it came to the vote was the single Conservative councillor, Cllr Maurice. Aside from parking his objection was based on the density of the development in what he considered a suburban area and clear breaches of specific and current Brent policies.  He was used to breaches of guidelines but policy was a different matter.