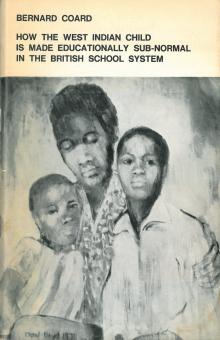 The lag in achievement of British Black Caribbean Boys compared with their peers has been a nagging issue in education since at least the 1970s.  Historically there have been problems such as disproportionate numbers of Black Caribbean Boys labelled as ESN (Educationally Subnormal) highlighted by Bernard Coard (1971); disproportionate numbers allocated to Disruptive Units, often known as 'sin bins', both on and off school premises (National Association for Multi-racial Education 1979-81); the need and for, and position of black teachers, and the ongoing issue of disportionate  numbers permanently excluded from  school - often now seen as 'off-rolling': pupils removed from school rolls just before examinations to boost a school's position in the league tables. All addressed as examples of institutionalised racsim.

Throughout these decades there has been a response from the black community which included black parent movements in many areas of the country, supplementary Saturday schools and ongoing campaigns over allocation of black boys to non-examination streams, racist stereotyping, a euro-centric curriculum and much else. The passion that Brent's black community has for education, and concern over under-achievement was very evident at the recent huge public meeting over the future of Bridge Park. The link between that concern and the way the community felt they had been treated was clear.

Brent responded back in 1986 with the Development Programme for Racial Equality (DPRE) which faced a vociferous hostile media campaign about 'race spies' in schools. A further attempt to deal with the issue in 1991 based on  a Warwick University Report 'Creating Equity'  which recommended a race relations policy to the Council, resulted in a rowdy debate that led to a rebuke to councillors from the then Chief Executive Charles Wood:

Without exception it is fait to say we are stunned by the divisions encouraged and emphasised in the comments made and in particular the repeated attacks on individuals and groups of officers.

The night before I listened to the Brent Schools Music Festival - 450 children from all tehnic groups revelling in the sheer delight of sharing their distinct cultures.

It is difficult to relate the debate that followed to the reality of life in Brent today.

To its credit, given that history,  Brent Council decided to again grasp this nettle two years ago with the Back Caribbean Boys Achievement Project which saw 'champions' designated in most Brent schools to seek ways of addressing the under-achievement issues and meet  key targets in 'closing the gap' between the boys and their peers. The boys were the only group in Brent schools that had been significantly under-performing over the last three years. There are 1,810 boys of Black Caribbean heritage in Brent schools, 4% of the school population. The project, led by the Brent Schools Partnership, has set up a portal for parents as a resource to support their child and families in this endeavour. Parents who would like access should approach their children's school.

Thankfully in a period when Black Lives Matter has taken centre stage the project has not attracted press hostility.

A report to be discussed at tonight's Community and Wellbeing Scrutiny Committee sets out the overall context of Brent schools and the progress made in closing the gap. You can see the web broadcast of the 6pm meeting  HERE.

The diverse nature of Brent’s population poses a range of challenges for schools, the most significant of which include the integration of pupils arriving late to the UK education system, high general mobility, language development needs and deprivation. This diversity is not a fixed picture but rather there are rapid changes to the population. A very high proportion of pupils have English as an Additional Language (65 per cent) and a large proportion of under 16s were born outside the United Kingdom, many starting formal education in England much later than their peers, often with little or no English, and sometimes with no experience of any formal education. The largest spoken first languages other than English are: Gujarati (nine per cent), Arabic (eight per cent), Somali (six per cent), Romanian (five per cent), Urdu (three per cent), Tamil (three per cent), Portuguese (three per cent) and Polish (two per cent).

In addition to new arrivals, socio-economic pressures placed on many of Brent’s families combined with a housing stock which relies heavily on privately rented accommodation, contribute to relatively high levels of pupil turnover in many of our schools. The proportion of Brent pupils who are disadvantaged is 24 per cent. There is a higher proportion of pupils identified as disadvantaged in the secondary phase (28 per cent).