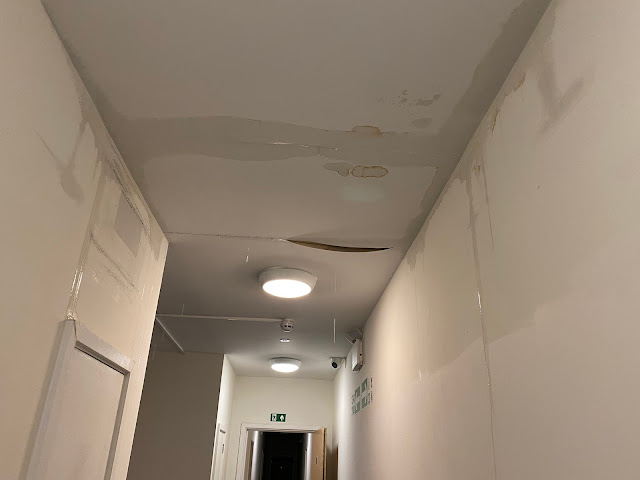 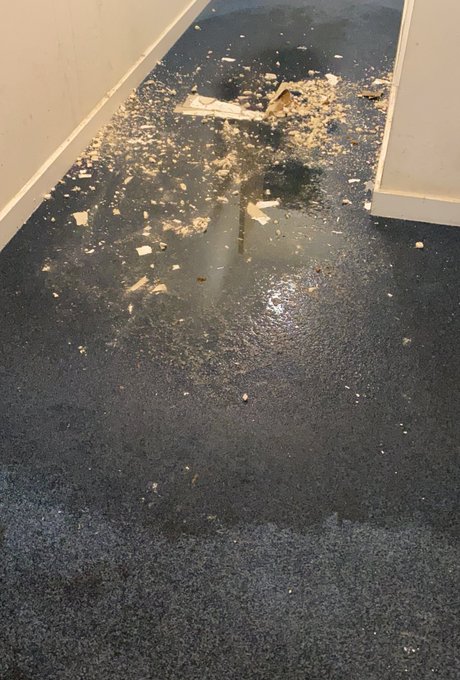 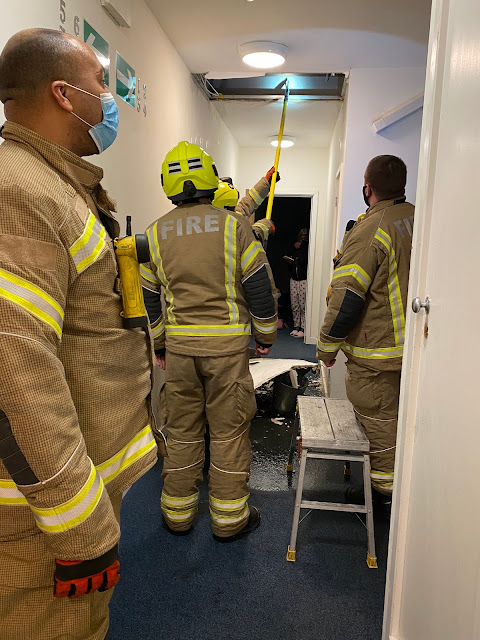 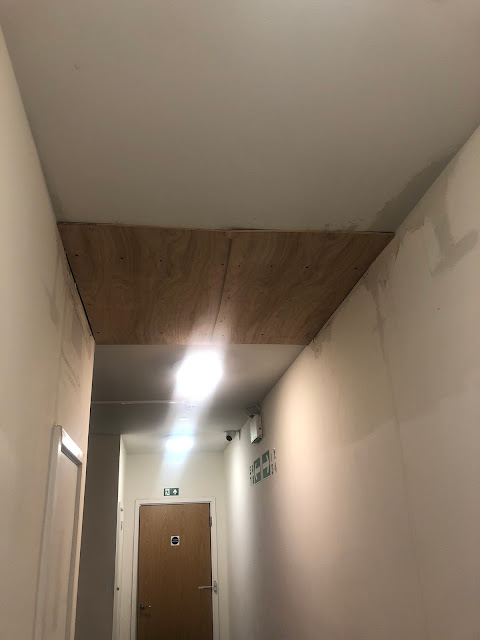 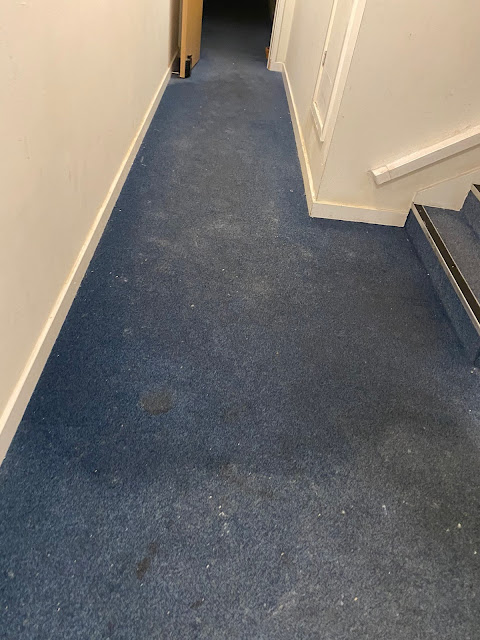 Pictures by permission from Thaiarna

Twitter message to Wembley Matters and Brent Council following publication of this story:

We're in contact with landlord about repairs - in meantime we’ve carried out ‘make safe’ and cleaning. The ceiling taken down by fire brigade will be decorated once new plaster is dry. We’ve today been contacting our residents individually; they can also call 020 8996 4200

Residents of Prospect House had a miserable weekend as they coped with a ceiling leaking contaminated water on to a communal corridor and had to send desperate messages to Shepherds Bush Housing Group to send in an urgent repair team.

The Fire Brigade fortunately got to the block just before the ceiling collapsed. Carpets were soaked with debris and foul  water.

The neglect of the block by the landlord, the housing group and Brent Council has made headlines with the residents facing eviction and little assurance of rehousing. LINK

A resident of the block told Wembley Matters:

They have used a wooden makeshift plank to hold up the ceiling I’m not sure how safe this is or when a proper ceiling will be installed.

We had to end up calling the London Fire Brigade to assess the ceiling and they where luckily in the building when the ceiling collapsed to ensure no one was hurt. We all have kids in this building the ceiling could have fallen on anyone and even worse a child !

They brought round someone to clean with a rug doctor but the water marks and stains still remain and there is a pungent smell of toilet waste that reeks in the building. We also have water marks and peeling wall plastering along where the ceiling has fallen.

This is unhygienic and unsafe living standards and I’m sure no one from Sheperd’s Bush Housing Group or Brent council would want to live here themselves.

Brent are also not helping to rehouse individuals as we are approaching being evicted from our homes . This is the sad reality of living in social-housing on a low income we are treated like dirt.

The floor looks worse than it was before. This is what we are paying for service charge absolute joke ! And the toilet waste smell along the corridor I have to put something to cover underneath my door to avoid the smell entering into my house.

We're sorry for inconvenience when soil stack failed. We were there as soon as possible Friday night to do initial ‘make safe’ repair. Cleaners did initial deep clean Sat am, then specialist chemical clean Sat pm. We will be there today to assess action and will update residents.

Prospect House was converted to housing from office accommodation less than five years ago.

Regardless of the matter being of a urgent need the housing association still was reluctant to give much needed help or assistance. I called the fire department as I analyses the situation at deemed it to be serious as the considering was much worse than the day prior! The fire brigade came with 10 mins of me making that call as also assessed the area and deemed it as a hazard hence why they pulled the ceiling down then informed us tenants the the water leaking was unsanitary and unsafe. That night a member of SBHG showed up only to make phone calls and advise that a plumber & cleaning team will be on there way as soon as possible, 30 mins on nothing. After a long while a SBHG plumber came and literally stuck the pipe with some sort of sellotape and wood and covered the whole in the ceiling with a plank of wood, they swept the debris and that was it. The following day the smell in the block worsen, a cleaner showed up but only cleaner 3% of the issue. I am fully disheartened with the service.

Deafening silence from Brent council and councillors on all this. Brent paid millions to the scumbag tax dodging landlord to convert the office block. Shepherds Bush have totally failed to take any meaningful action or to act as decent managing agents. Both have failed to help the evicted tenants, too.

And not one mainstream media outlet has picked this up. Could it possibly be because the tenants are mostly black single parents, I wonder.

To reinforce Alison's point about the 'deafening silence from Brent council and councillors':

On 28 January, I sent an email to the Cabinet Lead Member for Housing, Cllr. Southwood, with copy to the three Stonebridge Ward councillors, setting out a comment I had made on an earlier Prospect House blog article.

My email was headed "Tenants facing eviction from Prospect House", and I concluded by saying:
'I hope you will take note of these views, and ensure that this matter is properly, and sympathetically, dealt with by Brent Council.'

I have not even received an acknowledgement, let alone a reply, from any of the recipients.

Brent Council appear to be ignoring the plight of the families they asked Shepherd's Bush H.A. to house in these substandard flats, as if it is nothing to do with them.

I don't think that is an acceptable way to treat the borough's residents. Do you?


The tenants of Prospect House are (presumably) ordinary members of the public and so they are less likely to get media coverage that (black) and (Asian) public figures are accustomed to in spite of all of them being part of the (I dislike this term immensely) BAME community.

In addition to that, the subject matter is a "local issue" even though it is (presumably) something that black people outside the capital, deal with on a regular basis.

I'm not suggesting that due to it being a "local issue" justifies less coverage by mainstream media:
after all, the Grenfell Tower fire attracted worldwide media attention (and rightly so) irrespective of the fact that most of the victims were part of the aforementioned community.

It is evident that our society is one that treats individuals according to their race, gender, age, employment status, mental, physical health, sexuality, and religious affiliation etc.

Our country is built and ruled upon values that are supposed to unite us and yet the reality is certain communities such as the one in question, is accustomed to feeling (if you like) undervalued and even inferior in comparison to white people.

How often we hear and read about black actors, singers etc that feel frustrated by the lack equality in their chosen profession.

Such complaints undoubtedly make white actors and singers feel uncomfortable
but is that justified?

Are the actors and singers responsible for the inequality that causes complaints and resentment or is it the responsibility of the executives that control the business?

The same question applies to the so called British values that are supposed to unite, but more often than not, exacerbates the ever increasing division between BAME and their white counterparts.

How long does one keep wasting time waiting for something to work that
works in a way that is out of kilter with the so called values?
Take the rule of law, if everyone tried to apply the commandment to love your neighbour each day, in terms of not stealing another person's property,
refusing to physically attack another person with the intention to wound or kill, and to treat each other with respect, black people would have less reason to feel undervalued because everyone would be accepting their responsibility to do their bit to create a fair and safe society.

In short, the rule of law is fulfilled when people treat each other with respect and avoid doing things that break trust and cause division.

Ill-treatment isn't limited to one particular community
because it is a fact that all people suffer at the hands of another
because to a great extent, we are all united by imperfection and imperfect people tend to make mistakes that often cause problems.

Nevertheless, just as people learn to seek out things that hurt them each day such as cigarettes,
we can also learn to change our culture so that we wake up each day with the intention to do something to restore trust
and that is only possible if we put forth effort for a good purpose.

To a great extent, it can be said that we are reaping what previous generations have sown and the current one follows their example.
If we think that we can continue sowing bad in order to reap the means to sustain our lives without thinking about the effect it has upon the planet (upon which we all depend) let alone the effect it has upon the people that all business depends on, then we are comparable to a country full of mind blind people that close their eyes to the problems they cause and the effect it has such as :climate change, racism, nicotine and class A drug addiction,
homelessness and people that pay rent to live in run down slums.

Further to my comment (16 February at 14:05 above), I have now received a response from Brent's Lead Member for Housing, Cllr. Eleanor Southwood.

Martin has posted this as a separate blog on 24 February 2021, and I would encourage anyone interested in Prospect House, and the plight of its tenants, to read it.