Cllr Krupa Sheth promises a response from Brent Planning regarding the GLA investigation into housing typologies, focussing on housing density and the development of tall buildings for residential use in London 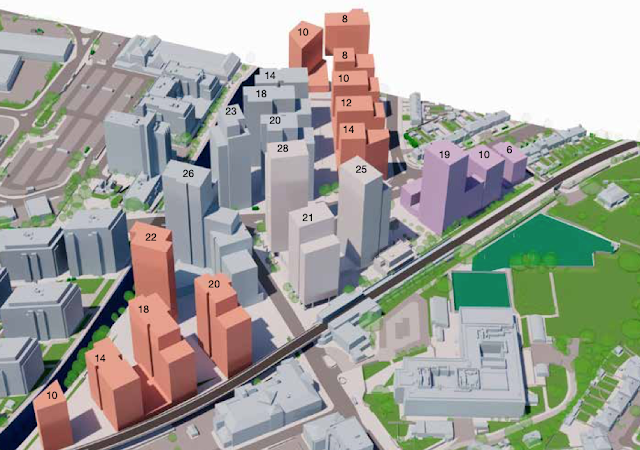 The Committee does not believe that tall buildings are the answer to London’s housing needs and should not be encouraged outside of a few designated and carefully managed areas.

Cllr Anton Georgiou (Alperton), frustrated by the failure of Cllr Shama Tatler to deliver a response to his question at Full Council in September on the Council's response to the  GLA Planning and Regeneration Committee's report on tall buildings, instead addressed his question to Cllr Krupa Sheth (lead member on environment) at Monday's Full Council.

Citing the Council's declaration of a climate emergency and claiming that studies showed that the Council's 'obsession' with tall buildings was detrimental to the environment he asked:

What steps will be taken to acknowledge and act on the warning  outlined in the report into tall buildings that we all received from the GLA Planning and Regeneration Committee? Does this Council plan to continue ignoring local residents' views, and will the adminstration commit to undertake a full environmental assessment by an independent party of each planning application for a tall building before steam-rolling through approval?

Responding, Cllr Krupa Sheth claimed that more than a thousand resident signing up to the Brent Environmental Network showed they were doing a 'great job' in listening to residents. She went on regarding the main question:

'I will ensure someone from Planning Department will respond back to you.'

It is likely that the Planning Department it its reply will cite the independence of the Planning Committee from the political process. The chair at each meeting reminds the Committee that it is a non-political quasi-judicial committee bound by the national policy framework, the London Plan, Brent's Core Strategy, the emerging Local Plan, development management policies and other planning guidance. They are also reminded that there is a national housing shortage and targets have been set for the borough.

Occasionally they are reminded that if they go against officers' recommendations on a particular application, developers may make a legal challenge at great cost to the Council.  In addition we know that at least one Labour councillor who has exercised independence on the planning committee has been removed subsequently. LINK

All this means that the Committee operates within narrow official and unofficial limits and it is the above-mentioned policies that need to be considered when challenging officers'  recommendations, particularly when they recommend approval even when the application does not comply with guidance on issues such as amount of amenity space, access to daylight, density etc. In the final analysis it may be that the policy needs to be changed - particularly in the Local Plan that, after consultation, is on the brink of final approval.

Another approach would be Scrutiny Committee considering the issue of tall buildings in the context of the Report and inviting the Chair of the GLA Committee to attend, give evidence and answer questions.

This is the GLA Planning and Regeneration Chair's letter sent to all councillors and referenced by Cllr Georgiou. Click bottom right for full page version.

It will be interesting to read the response from Brent's Planning Department to the GLA letter, which Cllr. Krupa Sheth has promised, especially as the advice given in the letter goes against much of what Brent's planners have been saying is "acceptable" for the past few years!


A thousand residents signing up to the Brent Environmental Network is a not a testament to the Council doing a great job of listening, it is rather, a reflection of the degree of public interest in the relevant issues.

The way in which the Council can demonstrate that it is actually doing any kind of a job of listening, would be for it to publish details of what measures it has taken in response to the various suggestions received.

Sweeping statements by councillors that bear scant relation to reality, damages and undermines the democratic process.

Brent banks on vaccinations and then corporate carry on 'business as usual.' For example the South Kilburn TBZ still being forced.

GLA is clearly very slowly becoming aware that with vaccine avoiding variants now coming to market, London is catastrophic weakening itself in terms of connective resilience and basic public heath being allowed to all families who live here.