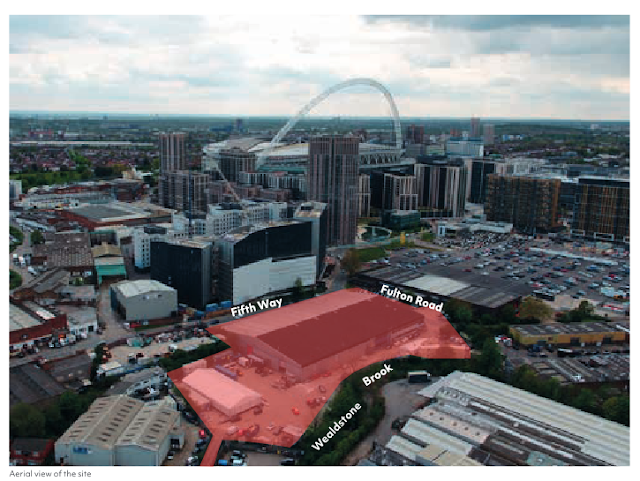 The Euro House site (before development) 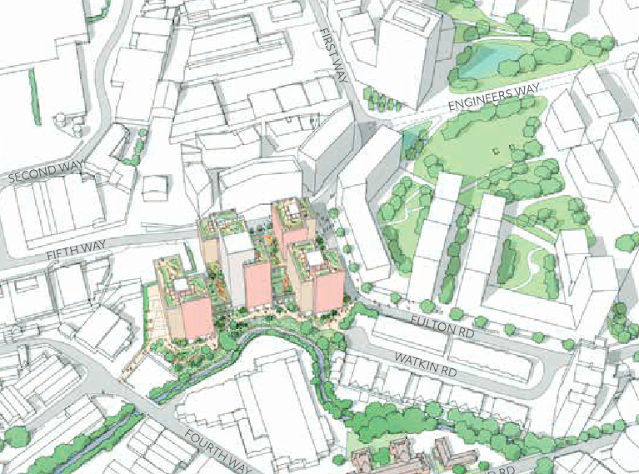 UPDATE: The applciation was approved by Brent Planning Committee with one vote against. Cllr Kennelly objected on concerns over the flood danger and the distribution of affordable housing.

Tomorrow's Planning Committee will consider a huge development on the site of Euro House Car Parts  in Fulton Road, Wembley Park. A former 2 storey building will be replaced by five tower blocks of up to 23 storeys. The site if of particular interest due to its proximity to the Wealdstone Brook and as usual issues around the amount of truly affordable housing. It has beenre-named 'Waterside'.

The image below puts the site (outlined in red) in the context of the high rise developments in the area - built, near completion and planned. The proposal marks a further extension of the replacement of light industrial buildings by high rise residential. 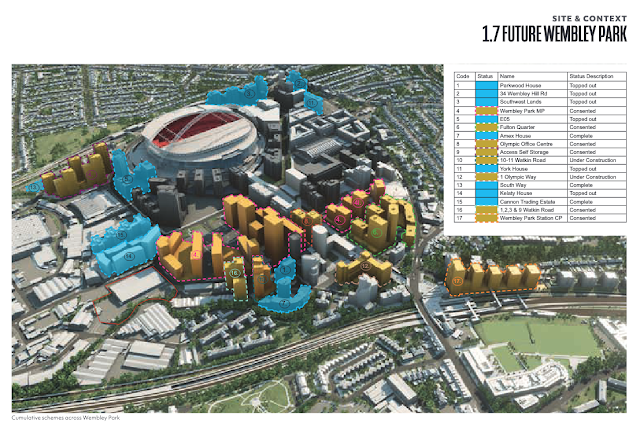 The proportion of proposed housing that is truly affordable remains an issue for many memberts of the Planning Committee. Officers continue to include Shared Ownership under affordable although this is disputed by many regarding its affordability for the average Brent resident looking for housing. Removing Shared Ownership would make only 142 of the 759 units affordable.

We should add for comparison:

The scheme would provide a total of 218 affordable units (29 % by units and 35% by Habitable room), of which 80 would be low-cost homes provided at a London Affordable Rent. Although this is below both Brent and London Plan threshold targets, it has been demonstrated by a financial viability appraisal to exceed the maximum amount of affordable housing which can viably be provided on site, and therefore is policy compliant.

Officers support the number of units proposed despite it being  higher than that recommended for the site:

However, it should be noted that the site capacities within policies are only indicative and the scheme would deliver a significant number of homes which would make a significant contribution towards identified housing needfor both private and affordable homes. The increase in the number of new homes, above the indicative capacity within the allocation is therefore considered to be a benefit of the scheme and supported in principle subject to the consideration of the remainder of the material planning considerations.

Officers also support replacement of employment space (research & development, light industrial) on the site at only 50% of that which  it displaces. 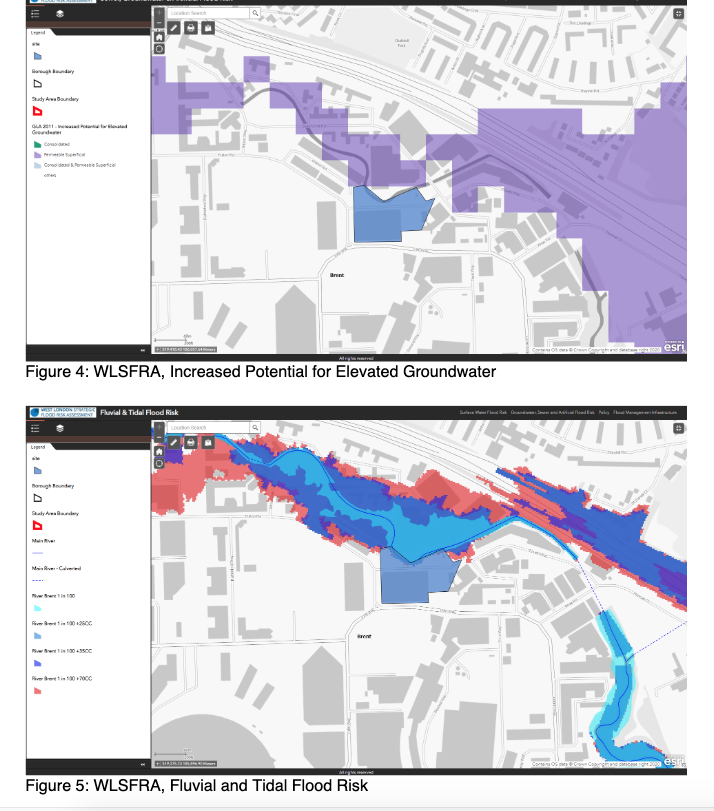 The site is next to a bend in the Wealdstone Brook and so both fluvial (river based) and surface water flooding are relant. The proposed development is kept 10 metres from the brook. The officers' report outlines the SuDS (Sustainable Drainage Strategy for the site):

At present the site discharges unrestricted into Wealdstone Brook. The proposed development will also discharge to this same location via the existing outlet. The proposal is to provide attenuation totalling 1000m3, designed to a 1:100-year storm event + 40% for climate change, and the discharge into Wealdstone Brook would be restricted to 6 litres per second, similar to greenfield runoff rates. The site has been assessed for sustainability based on the Drainage Hierarchy.

The SuDS strategy is as follows:

All of the buildings to discharge to a single below ground attenuation crate tank system located to the east of Block E.· The podium decking above the parking will be planted out with a dense green/blue roof providing further attenuation storage in these zones.· All buildings will incorporate rainwater harvesting as much as possible.· Wherever possible hard surface areas will be formed using permeable paving and voided aggregate subbase.· All tree pits and planting will be directly linked to the voided aggregate subbase to provide irrigation forthe planting.· The landscaping scheme includes rain gardens/swales along the northern boundary adjacent to the watercourse.

The planning application contains pretty illustrations of how the brook and a footpath alongside will be incorporated into the scheme. Experience demonstrates these often do not match the post-development reality but let us hope that the developers are held to their promise. The bank of ther brook is quite steep and this presents a challenge. On other developments promised public access has not materialised. However, it should not be hard to improve on the present: 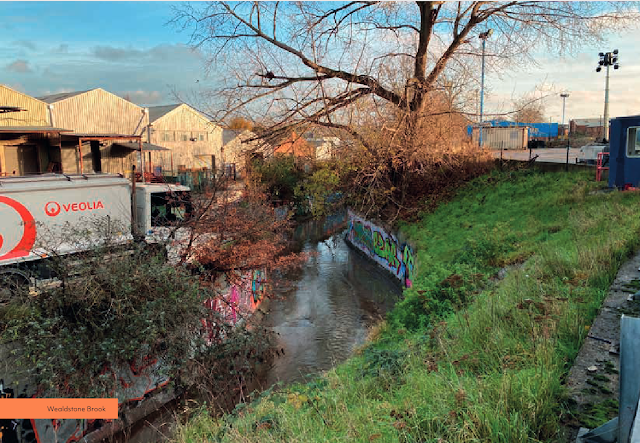 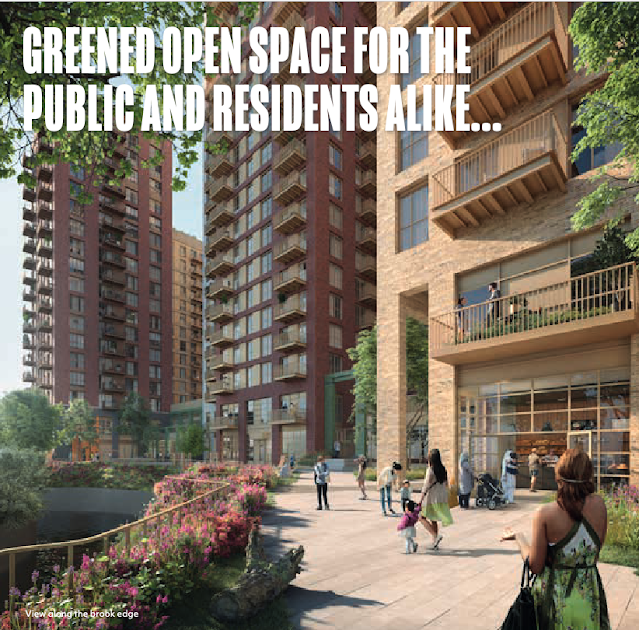 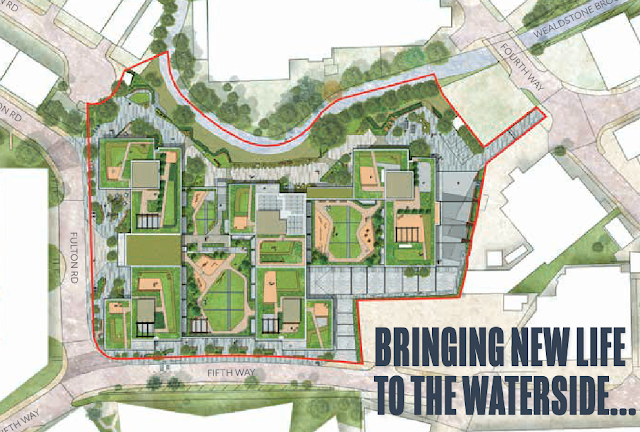 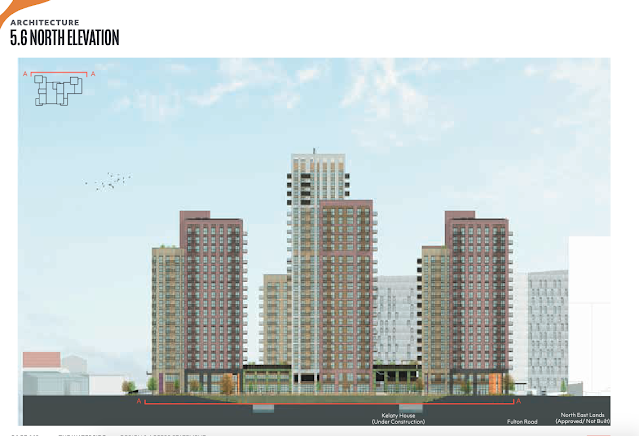 Labour Councillors in Brent are destroying our Environment with their monster Tower Block policies.

All Brent Councillors were sent a GLA Scrutiny Report into the damage caused by tall buildings produced by experts at UCL.

Yet despite being challenged by Lib Dem Councillor Anton Georgiou they refuse to listen and neither does the Labour Mayor of London.

Sadly Brent Council declaring a "Climate Emergency" is the usual Labour posturing sham as they refuse to take action to restrict the height of buildings and thus take genuine action on restricting the environmental damage their Tower blocks cause.

The only person on the Council opposing the excessively massive and damaging Labour Tower Blocks is Lib Dem Councillor Anton Georgiou who has now highlighted this issue in two Council Meetings.

As usual - Labour Councillors will wake up when it is too late - and then blame someone else.

The River Westbourne, the tale of two boroughs; demonstrates well just how difficult Westminster (Central London's) engineered flood defence protections of life and property against Brent South Kilburn Growth Area extreme over development have proven to be to get to function and protect effectively as designers intend.

With many millions already spent, either Westminster Central London will keep on flood engineering to protect its conservation area villages 'way of life' OR Brent will now be government forced to protect what remains of its public owned natural parkland flood defences and to infrastructure attenuate fully for flood defences which are already by private interests destroyed.

Wealdstone Brook will clearly be a major flood risk challenge given a 59% increase in winter rainfall. Better that its water levels, quality and management are all kept in public view. What is OK now in flood engineering terms is unlikely to prove sufficient in a real world future flood event. The scary trend is that leaseholders and tenants pay for flood costs(with government flood loan debts/ higher insurance costs).

When the previous planning application for the Euro House site (20/2033) went to Planning Committee less than a year ago (December 2020), the application was for 493 housing units, with four blocks of between 11 and 21 storeys. Around 20% of these homes, 98, would have been "affordable", with 80 at London Affordable rents and 18 shared ownership.

The Committee raised concerns raised about the low proportion of affordable homes (the developer said that this was the maximum viable number), and about the height and density of the proposed development After some discussion, the application was approved, with the minutes recording: 'Voting on the decision was as follows: For 5; Abstention 1; Against 2.'

The new application, 21/2989, has come back seeking up to 759 residential units on the site, with five towers ranging from ground PLUS 14 to 23 storeys. 29% of the homes are claimed to be "affordable", but only 80 (10.5% - the same number as the previous application) would be at London Affordable rent levels.

76 (10% of the total) would be for shared ownership, but would anyone now risk taking on the lease of a flat on those terms?

Despite the well below accepted standards amenity space for so many homes, and loss of light to existing nearby properties, Brent's Planning Officers are recommending approval of the application.

Their main reasons appear to be the larger number of (so-called) "affordable" homes, and: 'Compared with the previous scheme, this proposal also offers an enhanced public realm landscaping offer, with substantially more biodiversity benefit and a more spacious path alongside the Wealdstone brook.'

No worries about the increased flooding risk, then!

Viability, viability, viability- the £3 million costing MACE Consortium community-led partnership neighbourhood Plan 2004 for South Kilburn Estate was viable when all residents had that vote (not a ballot), until that is it suddenly wasn't viable anymore.

A £100,000 model of the 2004 final plan deal for that vote, has now become fluid with all manner of towers growing all over it. Whatever- "development will look after itself". Developers certainly don't need to break-in at night to alter in any way they want this final plan model.

As for the only 7 new build for social rent flats in South Kilburn Land delivered so far (they belong to Royal Borough of Kensington and Chelsea) Doveberry Court bordering Maida Vale.

These homes form the new build homes for social rent benchmark in Brent.

I guess 23 storeys is the height benchmark for Wealdstone Brook side?

Future generations will pay the cost of the current Labour led Brent Council's reckless decisions to agree to more and more tower blocks in our already overdeveloped and hugely congested area so that huge property developers and overseas investors to make even more money.

At least future generations will know who to blame as there will be thousands of images and social media postings left behind of Cllr Butt and his followers making the most of their self promotion photo opportunities.

Thankfully there will also be Wembley Matters archives to show that there were people who cared about what was happening and fought hard to make a difference.

At least this new Wealdstone Brook side towers will be built and engineered for its very real ever present on site flood risk (hopefully with success if climate change is fully factored in).

City of Westminster if you look at the Westminster Draft Strategic Flood Risk Assessment 2019, there is a good map Fig 3.9 on p55 titled Surface Water Flood Risk Hotspots. The South Kilburn two rivers wedge shape into Westminster (highlighted on this map) follows the fluvial flood risk River Westbourne's borough boundary course as all being a widespread flood risk hotspot (Unity Place, Bourne Place, Argo House, Malvern Mews, Chippenham Gardens are all within this risk area as of course is much of Maida Vale too). On Gov.uk Check your long-term flood risk produced by the Environment Agency, if you type in NW6 5PT for example, 7 Malvern Mews comes up as being Surface Water Flood High Risk. Again, this is in reality because of fluvial flood risk where the culverted rivers (also as sewers used) below ground simply can't cope with Kilburn Major Town Colony extreme over-development.

The problem in Kilburn Major Town Colony, is that Brent seems to use only EA planning flood risk maps and then, designs, engineers and sells build planning permissions as if entire South Kilburn 45 hectare 'very large site' is low flood risk. Large underground car parks to sell and rent out, no problem, excavated right next to the River Westbourne flood risk hotspot (according to City of Westminster flood risk analysis only that is)?