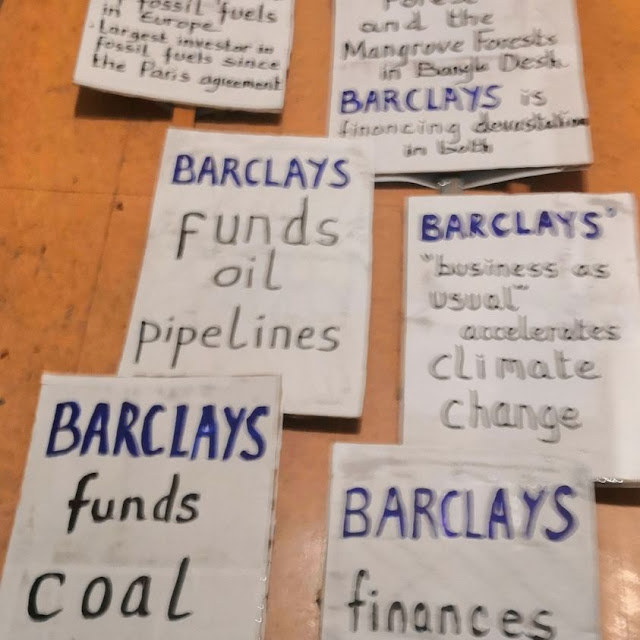 Brent Friends of the Earth will be demonstrating alongside other activists outside Barclays Bank, Cricklewood tomorrow in opposition to the bank's investments in fossil fuels.

Barclays is the largest individual provider of current accounts in the UK and the “worst banker of fossil fuels” in Europe, according to the impact rating carried out by Ethical Consumer magazine.
Barclays has been Europe’s biggest investor in fossil fuels since the Paris Agreement, according to the Banking on Climate Change report, providing 36% more finance than the next worst European banker (HSBC). From 2016-19 the company invested $118.1 billion (£862 billion) in fossil fuels. It is the tenth biggest funder of fossil fuel expansion internationally.
At its AGM in May 2020, over 75% of Barclays shareholders voted against a resolution to end the company’s investments in fossil fuels.
Among the fossil fuel projects funded by Barclays are:
Bangladesh’s coal expansion
Barclays has provided funding for the Rampal Power Plant in Bangladesh. The plant threatens the world’s largest mangrove forest, the Sundarbans, a vital carbon sink that reduces CO2 in the atmosphere.
The Bangladeshi government plans to increase dependence on coal from 2.8% to 37% over the next decade.
According to Tonny Nowshin, a researcher at environmental and human rights organisation Urgewald, the pollution from the plant would cause low birth weight for 24,000 babies and premature death for 6,000 people.
Financing deforestation
Barclays has provided financial services worth millions to five beef and soy companies known for their links with deforestation. These include meat producer JBS, whose controllers confessed to bribing more than 1,800 politicians in Brazil in 2017.
Violations of Indigenous rights
Many of the projects that Barclays backs are linked to serious human rights abuses, including ongoing violations of Indigenous rights. These include the Dakota Access Pipeline and tar sands pipeline projects which will cross Indigenous territories.
TO JOIN THE DEMONSTRATION MEET OUTSIDE THE CROWN HOTEL, CRICKLEWOOD BROADAY AT 12.15PM. THE DEMONSTRATION IS AT THE BRANCH OF BARCLAYS OPPOSITE THE HOTEL FROM 12.30PM.
Posted by Martin Francis at 13:43:00