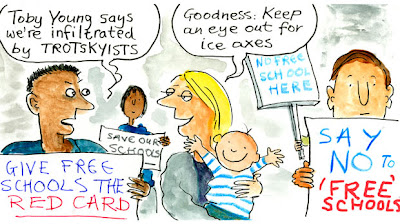 I hear that there was a right old ding dong at Labour's Brent Local Government Committee last night when they debated the Brent officers' recommendation that the Council should get involved in setting up a free school.

Nationally Stephen Twigg has failed to issue a clear policy and this has left local Labour parties in a quandary. When a new secondary school was required under the last Labour administration it was argued by Brent officers that there was no alternative to an academy because of the Labour government's policy that all new school should be academies. This opened the way for the ARK Academy and the subsequent conversion of other former local authority schools in Brent to academy status.

This  argument is now being repeated on free schools and the Coalition government policy. Andy Donald, Director of Regeneration, who seems to be directing education policy rather than Krutika Pau who is Director of Children and Families, told Brent Labour Group a week ago that in order to address the shortage of school places that there was no alternative to the Council setting up a free school in partnership with an outside body. I have argued before that the 'numbers' approach to school place shortage was leading to school expansions and bulge classes which paid little heed to the quality of education on offer. Putting builders rather than educationalists in charge is likely to have major repercussions in the future.

In my previous post on this issue I remarked that Brent officers' wouldn't have put forward a free schools strategy without the tacit agreement of Labour leader Ann John. This proved to be the case last night at an emergency meeting.  Ann John and Mary Arnold (lead member for children and families) supported by half a dozen others argued that although they didn't like free schools there was no alternative to supporting them because otherwise children would be denied a right to be educated.

Former Brent South MP Dawn Butler was joined by Cllr Moher (not a Trot as far as I know!)  and veteran Brent Labour activist Colin Adams in opposing the principle of free schools and only agreeing if further work by external consultants established that there was no alternative. Their motion was narrowly carried.

Ann John was not happy as she is used to being 'She who must be obeyed' and suddenly the cavalry arrived in the person of several more councillors who appeared to have been mysteriously summoned and a new motion was put. This opposed free schools in theory but stating that Brent Council should choose a free school partner to work with.

This motion was also carried so Labour now has two policies both opposed to free schools in principle with one seeking delay for further research and the other advocating an immediate partnership.

This debate need to move outside the Labour Party so that Brent teachers and parents have a say in the future of educational provision in the borough. Free schools do not have the democratic accountability of local authority schools, take a disproportionate amount of funding and open the way to experimental teaching and curricula with a potentially damaging impact on children. As with the ARK Academy the first free school in Brent will open the way for others to follow, producing an ad hoc competitive system where working class children may well lose out.

Interesting post. Not sure about the last sentence regarding working class children losing out though. Both free schools and academies will be subject to the same selection criteria as LEA schools. They also have an incentive to take pupils from disadvantaged backgrounds as they get more money per pupil that way.