From 'The Caterer and Hotel Keeper' 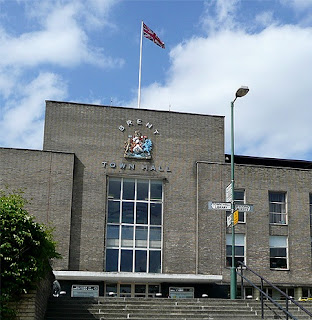 Conversion to a hotel is a possible option for the future of Brent Council's Town Hall, which is soon to be put up for sale.

The Grade II-listed 1930s building, which sites on a five-acre site with views over London, is to be sold as its life as a town hall will end with the opening of Brent's new Civic Centre in June 2013. It is hoped that a new owner, who will preserve the heritage of the building, will be found before the council leaves.

Property agent Colliers International has helped the council prepare a planning brief, in conjunction with a heritage report, which says the building could be converted to a hotel or be used as a residential, healthcare, leisure or retail development.

A precedent for the conversion of a Grade II-listed former town hall to a hotel was created with the £20m opening in Bethnal Green of the Town Hall Hotel and Apartments, in 2010. The hotel went on to win the RICS London Award for Building Conversion.
Posted by Martin Francis at 08:40:00