With only minutes to go until the polling stations close I will hazard a prediction on the Dollis Hill by-election front. 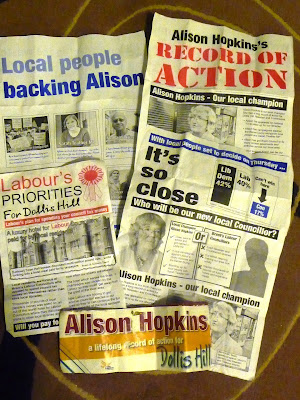 Despite the irritation of many at the deluge of leaflets that have gone through letter boxes this week and last,  I expect Alison Hopkins of the Lib Dems to win. Not many will have taken in the fact that many of the red and blue leaflets were not from Labour or the Tories in the  few seconds it takes to consign them to the recycling bin. If you look hard at my photograph you can even see the Liberal Democrats symbol on the small (but long) yellow leaflet.  W poor old Greens were not even honoured with a Lib Dem leaflet in our colours!

Lib Dems  have been out in force with Paul Lorber and Bob Wharton toiling away but I saw much less of the Labour Party and nothing of the Tories. The Lib Dems are likely to pick up some of the Tory votes. Alison Hopkins does have a local reputation at the Ox and Gate end of the ward for her community activism and that will add some votes to her advantage in standing in a ward that the Lib Dems held previously and the sympathy vote for her predecessor who was well and fondly regarded. One left-wing activist told me that he was voting for her on the basis of her community politics despite rejecting the Lib Dem's Coalition policies.

My colleague Pete Murry fought a straightforward and honest campaign on policy issues and I hope to see him get a decent vote in this closely contested Lib Dem-Labour battle.
Posted by Martin Francis at 21:56:00