In the West End last night the pavement cafes were crowded with people enjoying the balmy evening - t-shirts and sleeveless dresses abounded.  However, my companion voiced an unease that is becoming more common as the unseasonal weather continues: 'This is lovely but it's not right in March is it?"

Meanwhile, on my doorstep in Fryent Country Park, the impact of the drought is increasingly evident. Some of the clay paths are already dried and creviced and some ponds are completely dry. 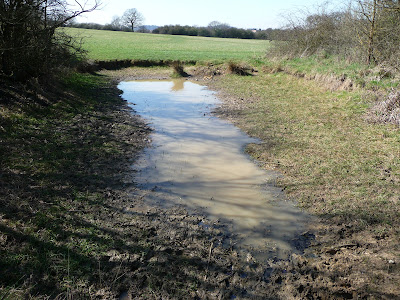 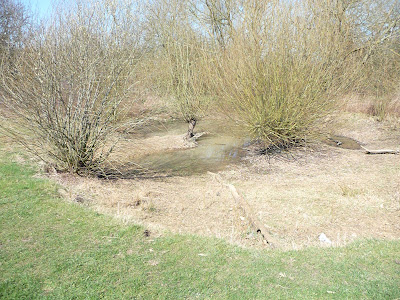 Corresponding with an officer in the Parks Department I was told:
The  immediate impact is on the amphibian life cycle with doubts over whether some will complete their life cycles this season.  The photograph below shows the edge of the pond (above top) where some recently hatched frog tadpoles have already died after the water in which the frogs spawned receded. The black areas are masses of tadpoles stranded in shallow water. Some tadpoles are stranded in tiny pools of water created by the paw prints of dogs and foxes which will dry up quickly without rain.  Tadpoles in shallow water are easy prey for predators and crows have been very active on the fringes of the ponds.It is generally reckoned that normally out of 2,000 eggs only 5 adults will survive to breed - the odds this year must be much lower. 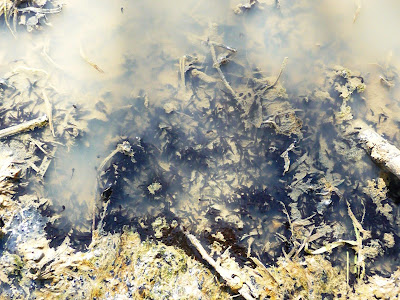 I have seen no necklaces of toad spawn at all in the Fryent ponds this year. Newts will also be affected because they wrap their single eggs in the leaf of a water plant and these are lacking in the residual water left in the centre of the pond.

The Fryent ponds are clay lined and it is possible that some garden ponds which have rubber liners will not have lost so much water, and of course their owners are able to top them up (until the hose pipe ban comes in) The 'amphibian crisis' this year means that it is important that those of us with our own ponds make a special effort to support any tadpole populations that we have.

Pond insect life will also suffer and it will be interesting to see if we have a reduction in the dragonfly and damselfly population, for example, this summer.. The Lombardy poplar trees on the crest of Barn Hill, a local landmark,  have been looking sickly for some time, with one falling last year, and I would expect further casualties if the drought continues.

Meanwhile down on the allotment my fellow gardeners are preparing for the worse, installing additional additional water butts and other rain home made rain capturing devices (eg old baths!), and thinking about drought resistance plants.

Sod's law probably means that having written this  by Monday the heavens will have opened and the conduited hidden waterways of Brent will have over-flowed.

It didn't rain on Monday but it is Tuesday at 1.20pm and it is raining here on Barn Hill. Hurray!

I suppose a hose pipe ban will solve all these problems and should you be caught using your hose pipe during this ban you will receive a £1,000 fine. How does a £1,000 fine help the environment?

The unit cost/standard charge rises, while your use of said utility fall's - you're going green and its all for the good of the planet...right? - wrong. The corporations are making more money by you using less of what they provide.

Water meters charge you for the same water twice - they just call it water in and water out and invoice you. lol