A chance to support a French restaurant in Wembley Park 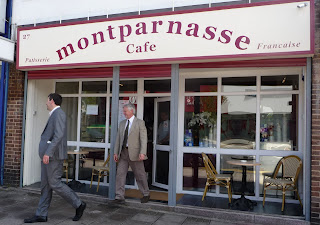 The Planning Inspectorate are considering an appeal by  the owners of Montparnasse  Cafe in Bridge Road, Wembley against Brent Council's refusal of planning permission to convert it into a restaurant.

The Council's decision was condemned on this blog at the time LINK and locals were perplexed by the Council officers' claim that a restaurant would 'result in an unacceptable loss of a retail (A1) unit which would impact on the viability and attractiveness of the centre for shoppers, contrary to policy SH7 of the UDP 2004'.

Since the refusal the Montparnasse has been shuttered pending the appeal.

Comments on the appeal can be sent to the Planning Inspectorate no later than September 25th 2012. They should be sent to the address below quoting reference number APP/T5150/A/12/2176952/NWF 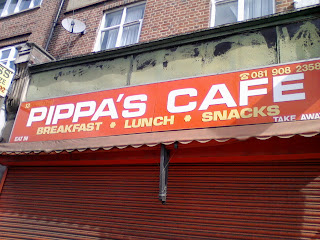 Meanwhile on nearby Grand Parade, Pippa's Cafe, famed for its great selection of cooked breakfasts, has finally closed down after serving the local community for many years. Customers included: building workers, the motor cycle training school, Town Hall workers and a loyal group of self-styled 'Last of the Summer Wine' customers who meet up regularly to solve the world's problems.   The family who ran the cafe  finally admitted defeat after losing money for several years. The cafe  is likely to have been hit by new local parking restrictions. The cafe, the family  and the bubble and squeak will be greatly missed.

However, Zayona, the Middle Eastern cafe/ restaurant next door has come to the rescue of bereft customers and has offered to open up in the morning  for cooked English  breakfasts.  I popped by the other day and found the 'Summer Wine' crew settling into their new home.

There's something rather comforting about the final twist in this story.