Help save Centerprise from closure 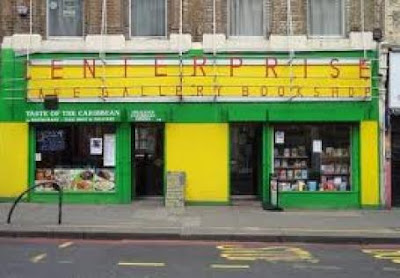 It is not just Brent where there are demands from the council for commercial rents after valuable social enterprises and community organisations have had peppercorn rents for  years. In Hackney the Centerprise Bookshop and Cafe which was a pioneering centre for black books, community action and education from the 70s onwards is threatened with closure.

From the 60s there were a number of black bookshops across London including  Bogle L'Ourverture, Unity and New Beacon which also published political pamphlets and books. Bogle published Walter Rodney's influential The Groundings with my Brothers in 1969.

The bookshops' political influence and success made them targets for racist and extreme-right groups so it is all the more galling that Centerprise, like Willesden Bookshop, will be closed by a Labour council.

It appears that Labour councils can no longer measure the social and community value of such amenities but instead have succumbed to the values of neo-liberalism and the 'market'.

An ongoing  fight to save one of Britain’s oldest black bookshops and an iconic community centre is to go to court later this year.

Officials at the Centerprise Trust Community and Arts Centre in Dalston, east London warned the centre could close because Hackney Council is to take its trustees to court in October to evict them.
Centerprise’s trustees have called a public meeting for August 29 at 7.30pm and are calling on the black community to help save the centre.

They said the public meeting, to be held at the Kingsland High Street-based Centerprise, would discuss ways of preventing the Council from evicting them and then selling the premises.

In a statement, Centerprise’s representatives said: "The organisation has served the people of Hackney and other Londoners for over 42 years. The Council is taking Centerprise Trustees to court on 15 October 2012 to evict them for no reason at Central London County Court."

Local residents have been up in arms over plans to close the centre, which also runs a restaurant and offers Saturday classes in English, maths and science to local children aged five to 18.

More than 800 people have so far signed an online petition to keep the centre from closing.

A Hackney council spokeswoman told The Voice: "We would much rather that this issue with Centerprise did not end up in court, but the current rent of £10 a week for a double shop-front, two floors and a basement on a busy high street is not a rent level that could continue for any organisation."

The council added: "Over the years the council has offered Centerprise a number of opportunities to apply to be considered for discounted rent under the council’s voluntary and community sector lettings policy. They did not take this up, despite a number of attempts from the council to encourage them to engage with us."

But Centerprise’s Emmanuel Amevor told The Voice last November trustees did not receive a change of rent document the council allegedly sent but were later told the centre had lost the right to protected tenancy.

He added: “We got this building under the Inner City Partnership Fund programme in 1983/84. The building was bought for us after successfully winning a competitive application. Instead of giving us a cheque they bought the building for us.”

Amevor added: “We used to pay what was known as the ‘peppercorn’ rent, which was £10 per week, but I believe this building is ours, so a penny paid to them is a penny too much."

“Now they want to move from peppercorn rent to market rent, which would be £37,000 per year.”

The online petition can be seen at http://www.petitionbuzz.com/petitions/savecenterprise