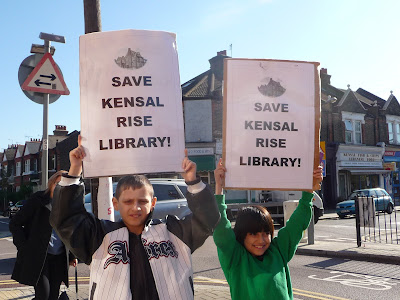 The Save Kensal Rise Library Campaign today launched an appeal, locally and nationally, to ask for pledges to help the community secure their library.
The appeal immediately attracted a 10,000k pledge from Daniels Real Estate Agents who have supported the campaign since it began. Other pledges so far have been made by local people.
The group who have been campaigning for almost two years to save their library urgently need financial support to strengthen their bid to All Souls, the Oxford College that ownership of the building reverted to after its closure by Brent Council.
Paula Gomez Medina a Trustee of the group said today,

We need to raise funds to secure the first year of operations, which includes urgent repairs to the building. We have a strong business plan and are confident we can make the library self-sustaining in the long-run, but we need the help of our supporters now. We are asking residents, friends, businesses and supporters to pledge a donation towards our target of 70K.
We need these pledges urgently - by September 7th when our proposal needs to be with All Souls College.

We will only collect payment if our bid to All Souls is successful. If we are unsuccessful people will not donate anything.

In return for support the group are offering supporters a chance to become permanent public benefactors of the library.
Other
Details about how to make a pledge can be found on the campaign website www.savekensalriselibrary.org
The Co-Chair of the campaign, Margaret Bailey, added:

Support from the local community and beyond has sustained this campaign. People cannot doubt the seriousness and commitment of this community to have a library at its heart. We have all fought hard and long. We hope we can rely on the generosity and goodwill of the many people who agree about the importance of libraries to the well being of civilised communities.
As Mark Twain who opened our library said, "Lack of money is the root of all evil". We have been put in the position where our fight is not enough, and we need to find finance to prove ourselves.

The Appeal follows Councillor Powney's claim on his blog LINK that campaigners have given up their fight for a library on the site.
Posted by Martin Francis at 17:06:00