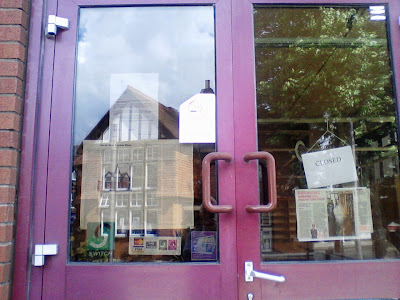 The empty shelves and locked doors of the Willesden Bookshop were a sad sight in Willesden today. The threatened old Victorian Library was clearly reflected in the windows on which were posted Zadie Smith's New York Review of Books article about the Willesden Green redevelopment and an article about the bookshop closure from the Brent and Kilburn Times.

In the few minutes I was there several people came up to use the bookshop and were rather bewildered to find it closed. Just as people had been at the closed libraries when they had come to use them and found them shut down.

This is another photograph along with the Wall of Shame at Preston Library which should make any Brent Labour councillor with a millilitre of socialism left in his or her blood tremble with shame. It was their partnerhip with a private developer, sneaked in behind the back of residents, compounded by their subsequent misinformation about alleged subsidies to the bookshop and failure to provide any real help with relocation, which sounded the death knell of this loved and valuable local resource.

Meanwhile on Wednesday the Library Lab (an organisation 'supported' by Brent Council) will be holding a consultation about the redevelopment. I was at Willesden Green to find out more. When I asked if Library Lab would be neutral staff member Joanna said  that they aimed to be more thorough and open than the previous consultations with this one spanning two months. Asked if the previous consultation organisers, Remarkable PR, were still involved and if so what was their role, she said she didn't really know but that there was lot of documentation from them to get her head around before Wednesday.

Wednesday's consultation will be at the Library Lab (the old cafe space within the building) between 11am and 8pm with presentations at noon, 2pm, 4pm and 7pm.


The fact is they (Brent Council and Galliford Try) are making this up as they go along. They hoped to get this all through the back door and weren't expecting this level of opposition. They have given 10 days notice for  this meeting. It is in the middle of the Olympics and when everyone who is not watching it is on holiday. If this isn't a case of burying bad news I don't know what is.

If Brent council had deliberately set out to ruin the Bookshop's business, they couldn't have done a more thorough job.

I tend not to ddrop many remarks, however I glanced through some comments here "Closed bookshop a reproach as new consultation on Willesden Green is scheduled for Wednesday".
I acgually do have a few questions for yyou if you do not mind.
Could it be only me or does it give the impression like some of the
responses appear like they are coming from brain dead folks?