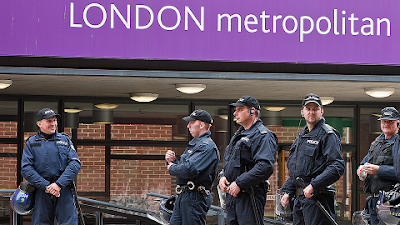 This Coalition government is making a pig's ear of education policy with the news this week that a number of free schools that have been rushed through now not opening in September, leaving children without a school place, and the collective punishment of students for administrative problems at London Metropolitan University.

A petition has been launched on the latter issue which states:


We believe that it is completely contrary to natural justice that students should be punished for problems emanating from their University.

We therefore demand that the UK Border Agency agree to an immediate amnesty for the international students at London Metropolitan University affected by the Agency's decision to revoke the University's ‘Highly Trusted Status’. This would enable them to continue their studies while the problems at London Met were addressed.

We believe that the UKBA's decision is a disproportionate reaction to a situation that could be addressed without the recourse to such drastic action. The UKBA's decision punishes thousands of students who are entirely innocent of any alleged immigration breaches and sends a disastrous message to the rest of the world that UK higher education is not accessible to international students. Its actions threaten the immediate futures of thousands of London Metropolitan students, as well as the future of the University, and casts a huge shadow over the very valuable contribution that international students make to the culture and sustainability of UK higher education.


Sign the petition HERE
Posted by Martin Francis at 10:42:00

I have just signed the petition, leaving this comment:
I believe that the lack of equality and diversity in the educational environments experienced by the 'key decision makers' responsible for decisions such as this constitute a severe deficiency in their capacity to govern fairly.
Alan Wheatley