Graham isn't a doctor but he is right about health cuts 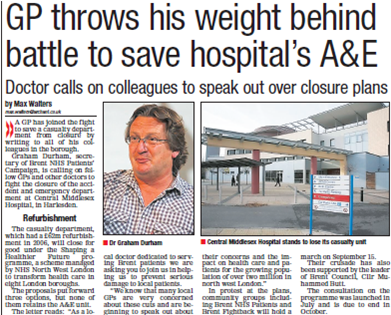 Brent Labour Party members and local activists got a shock today when it appeared that Graham Durham had become a GP (GP throws his weight behind battle to save hospital's A&E - Doctor calls on colleagues to speak out over closure plans -Brent and Kilburn Timesp2  August 16th).  The article was illustrated with a picture of 'Dr Graham Durham'.

In fact Durham had sent a letter out on behalf of Brent NHS Patients' Campaign about health cuts and the closure of Central Middlesex Accident and Emergency.  It was interpreted by the BKT as having been written by a doctor. You can see how it happened and it may end up in one of those little guides about the pitfalls of English grammar.

The dedicated 'local doctor' refers to the recipient of the letter and not the sender. Graham does not often refer to himself with a 'Royal we' and you will be relieved to know is not in the habit of impersonating doctors!

Health campaigners will be out again in Harlesden on Saturday afternoon between 2 and 5pm collecting signatures for a petition asking  local MPs to make a stand agains the threat to Central Middlesex and other North West London hospitals and the privatisation of the NHS.
Posted by Martin Francis at 22:03:00

OMG you've had a makeover.