Will children lose play and sports space through school expansions and academy conversions? 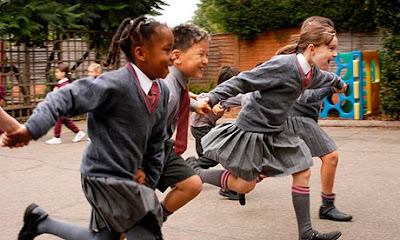 With the Brent Council Executive due to approve more primary school expansions on August 20th the impact on the amount of play space available to children will be a factor. Some expansions could mean increases in the numbers of children and less overall play space available than at present, while others will add more storeys to existing buildings and maintain existing play space but for increased numbers of children. There has been talk of designing rebuilds with roof top playgrounds that still exist today in some of the Victorian inner city school buildings. It is possible that there will be schemes involving the selling off of existing play space for housing to finance expansion, although that looks less likely following the securing of government funds.

Some secondary schools becoming academies may be tempted to  seek additional capital through selling off some of their land.

School play space and playing fields have become an issue during the Olympics and the Green Party's Children and Families spokesperson has intervened in the debate:

Childhood obesity is linked to a host of illnesses including Type II Diabetes,  Congestive Heart Failure and Cancer. A poor diet and lack of exercise are the main causes of childhood obesity.  Tragically little is being done by the Government to benefit schools in tackling these contributory factors with little spent on nutritious school food and Michael Gove committed to selling off yet more playing fields.

The Green Party believes that it is imperative to preserve children’s playing fields. The Conservative and Liberal Democrats coalition agreed with us in the beginning where they too “pledged to protect these playing fields” .  However, Secretary of State for Education, Michael Gove going back on his word and selling these recreational facilities to high paying developers, it is very difficult for children to find an area for them to keep fit.  Ironically only this week  Prime Minister David Cameron expressed concern that too many top British athletes in the Olympics attended private schools, and as a result, we are not as concerned with “sports excellence”   We cannot expect to have children of the future succeed in sports by taking away their venues to practice.


Sport is essential to the emotional and physical health of the nation, and the well being of children.  Children who participate in sport are proven to be happier and healthier.  Insuring the fitness of our children will save the NHS billions for years to come, yet for all the posturing of our public-school educated government they are still selling off school playing fields and reducing the time available for sporting activities. This is so short sighted it beggars belief.

The rising obesity levels and instances of childhood depression will only get worse if Michael Gove continues with his selfish and short-sighted plans.  Cameron’s pronouncements about public school supremacy are supremely hypocritical when the actions of his education minister will ensure only privately educated children have the teaching and facilities to become our next generation of medal winners.  If we want the playing fields of England to be filled with the next generation of Mo’s and Jessica’s the government must stop selling those fields off to the highest bidder.