Let's have a 'healthy' Harlesden debate on Saturday 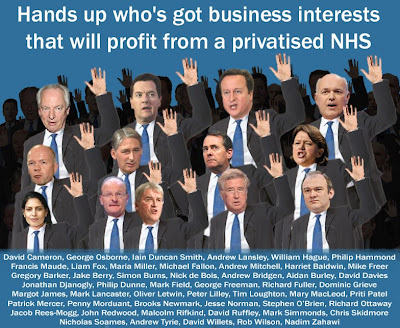 I had to try for ages to find out what time the Question and Answer session was at the 'Shaping a Healthier Future Roadshow' to be be held in Harlesden on Saturday.

Finally we were told that although the consultation was from 10am until 4pm that the Q&A would be from 11-12. There were problems about the timing of the Q&A at the Wembley roadshow and it began late.

Now expensive advertisements from NHS North West London have appeared in the local papers and guess what? They just have the 10am-4pm timing with no mention of the Q&A and its timing.

The Q&A is of course the only time the public get to hear alternative views about the proposals which include the closure of Central Middlesex A&E. Perhaps they really want to keep it to cosy 1:1s where the PR people have more chance of pulling wool over people's eyes.

Get there at 11am and let's have a public debate!

Look,
enough time has passed to show that whoever is in power take public health for granted.
for example if today someone started promoting a campaign for people to stop paying council tax how long do you think it would be before the government take action against that campaign?
and why would they take action?
well because they would argue that without the council tax public services would suffer right?
but without people being alive to pay council tax what then is more important money or public health?
also if we refuse to pay council tax we become law breakers and are liable to be punished accordingly.
yet it is lawful to set up a shop and sell along food and drink and newspapers, health destroying cigarettes.
and if a person decides they want to make a living from selling illegal drugs to the public like heroin and cocaine the government frowns upon that and makes it a criminal offence but what is the difference between a shopkeeper supplying the public with health destroying cigarettes and a drug dealer on the street corners handing out illegal drugs?
are they not both exploiting the public?
are not both showing more love for money than their neighbors?
wouldn't both argue when called to account that they are just trying to survive?
only difference is one is allowed to supply the public with the means to destroy their own health and charge them for those means at the same time and then the profit is split between the shopkeeper and the government.
but for some reason the government consistently refuses to legalize the sale of so called street drugs like heroin and cocaine.
but what is their reason for that?
is it because they don't want to be seen as colluding with drug cartels?
what difference is their between drug cartels and tobacco companies?
are they not all in in simply for profit?
and is the government not already seen as partners in crime with the tobacco companies?
after all without the protection from the governments they wouldn't be as powerful and rich as they are.
also the government wouldn't reap as much as they do in tax revenue if they didn't allow tobacco companies to exploit the public.
so again I say that as long as this corrupt and sleazy set up continues, health will just be something people dream about because in a country like this that does it's utmost to trap and corrupt people in order to make billions in profit with the permission of the government, life in Britain will be like living on a site littered with land-mines hidden under the ground so that every step you take could be your last and the sad and amazing thing is those land mine like traps are laid with the permission of the government.
Therefore I would warn every vulnerable person to never allow themselves to be mislead by politicians who talk about creating a healthier Britain...I say you would be safer trapped in a room with wild animals and no door than to live in a country Governed by wicked greedy hypocritical politicians and their greedy friends that run the business that is responsible for the 1000s of deaths from lung and throat cancer every year.