What future for education in Brent?

Education has been very much in the news recently from parental protests over the ending of hot meals at Our Lady of Grace Junior School hitting today's front page of the Wembley and Willesden Observer, to the failure of several free schools to open leaving children adrift and Michael Gove admitting the GCSE marking was 'unfair' but doing nothing about it.

In Brent the headteacher of Newman Catholic College (formerly Cardinal Hinsley High School) has admitted there is a danger of forced academy conversion after poor results and other schools are considering academy conversion or becoming cooperative federations. In nearby Harrow the biggest free school has just opened.

Brent Council has embarked on another round of school expansions creating primaries with more than 1,000 pupils and the possibility of more 'all through' schools. Headteachers are promoting a consortium public enterprise to replace Brent Council's School Support Service.

Sarah Teather has lost her job as an education minister but Michael Gove holds on to his position and will continue his 'reforms'.

So there couldn't be a better time (for the worse possible reasons!) to hold a debate about the future of education in Brent.

I hope as many people as possible make it to the debate that has been organised for September 20th at Copland High School. Details below: 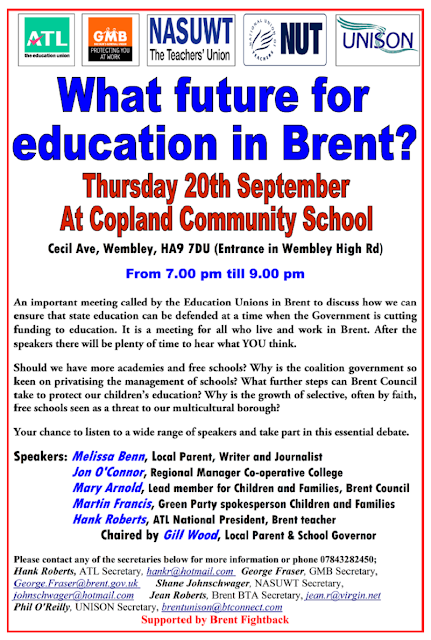