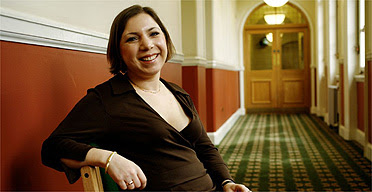 Brent Lib Dem MP, Sarah Teather, has lost her job as a junior education minister in David Cameron's reshuffle. Labour MP Steven Pound had teased her in the House of Commons yesterday, singing out, "You're going to get sacked in the morning".

Sarah Teather will be under pressure from her constituents to take a stand on Coalition policies now she is not restrained by ministerial guidelines. The most immediate issue will be the closure of  Central Middlesex Hospital. With the loss of Lib Dem membership in Brent and poor by-election performances by the party her prospects for the next General Election look poor.

James Lyons, deputy political editor of the Daily Mirror, tweeted this afternoon that Teather was standing down in order to fight for her Brent Central. Another explanation is that she was sacked as punishment for absenting herself from the House of Commons when there was a three line whip on the Coalition's welfare reforms. At the time a Tory back bencher asked David Cameron why she was still a minister and Cameron defended her LINK

Teather has been prepared to step out of line in the past, not least in previous battles over the Lib Dem leadership, so there is a possibility that she might become a critic of the Coalition from the left.

It is not the "closure of Central Middlesex Hospital". It is about closing the A&E department, and replacing it with a 24-hour walk-in minor injuries centre.

More serious - ambulence - cases would be taken to larger A&E departments, where you will have a better chance of survival and improvement. Modern ambulences are really mobile hospitals, for stabilising most common conditions.

There seems no problem with taking patients directly to, say, specialist burns units, so why not rely on the clinical decision to restructure into larger A&E departments in London? It would be no different to best-practice used around the world.