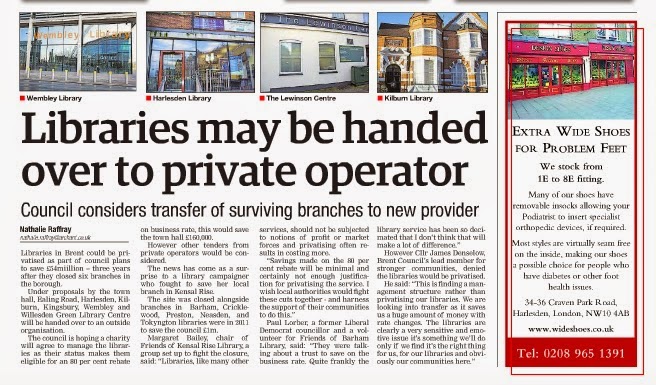 The Kilburn Times (above) puts the possible privatisation of Brent libraries management on its front page.  Management would be handed over to a charitable trust although details are not clear.

The story was first covered on Wembley Matters on January 4th LINK (Will privatisation of Brent Council's  library management damage the service?)  and I published an extract from a blog by Alan Wylie, veteran library campaigner, who made these points about the leisure companies or trusts:

What a Leisure Trust means in practice:

The move, ostensibly, is to save £160,000 in rates (trusts get charged 80% rather than the 100% the Council will pay), although this is a loophole that may well be closed.


Savings made on the 80% (rates) rebate will be minimal   and certainly not enough justification for privatising the service. I wish local authorities would fight these cuts together - and harness the support of their communities to do this.

Cllr James Denselow, now in charge of libraries under his Stronger Communities portfolio claims its a change in management structure, rather than privatisation and  'saves us a huge amount of money with rate changes'.  He recognised the sensitive nature of the changes and said the Council would do 'only if we find it's the right thing for us, for our libraries..and our communities.'

James Powney, whose blog has become a lot more interesting since he left the Council, wrote a article on the issue on Thursday morning LINK

Cllr Powney of course was the lead member when half of Brent's libraries were closed. He said that the wording of the officers' report ('established trust') suggests an existing body and the obvious one is that which currently runs Ealing and Harrow libraries:


The phrase "transfer management" suggests something more ambitious.  Not just founding a Trust but having the management taken over by a private company as in Greenwich or Hounslow.  This would be a lot more complicated.  A full procurement would need specification of a contract and a full tendering exercise for what would be a sizable contract.  In itself that would be a substantial one-off cost.  The Localism Act appears to have made this whole issue even more complicated than it was before.  The redundancy of senior management is likely to make the whole process even more difficult.

This option was discussed when I was on the Executive, and rejected.  The business rate saving was largely a piece of accountancy smoke and mirrors (I understand that the rules may have been partly changed since then), and it seemed to me that all the things a private firm could do to cut costs could also be done by the Council.  Of course, having direct employees also gives you more control and we wanted to ensure the success of the Libraries Transformation Project by having hands on management.  Therefore we only went for the Sports Centre part of the project.

The two James clearly have different perspectives and it will be interesting to see how this pans out. Meanwhile library staff are rightly concerned about what these vague proposals mean for them, their working conditions and their pensions.  The public should be concerned about what it will mean for the quality of their library service when the number of libraries has been halved and the council are proposing to cut the amount spent on book stock.

Business rates go to the council so why can't they propose a motion to rebate libraries?

Actually, they don't. Business rates go to central government, who then return a portion of them to local councils. The amount varies, according to whether a council is a net gainer - Westminster, for example - or a net loser. It's damnably complex, too - I'm remembering this from chairing Budget and Finance.

The present Labour Administration made their decsion to close half (6) of the Brent Libraries over 4 years ago. Their ideas about saving business rates have been around for a long time so it is reasonable to ask the obvious question - why the bright sparks at Brent Council have done nothing about this before? £160,000pa. for 4 years = £640,000.

Just to put it into context Friends of Barham Library operate from two premises at 428 High Road Wembley HA9 6AH and from Sudbury Town Underground Station. We operate on a shoe string without expensive Council Officers - but we do know about Charities & Trusts and how NOT to waste money. We provide volunteer Libraries and Bookshops from our two premises - without having paid a single penny in business rates. Happy to provide some FREE advice to the Council (in fact we have in the past in relation to the Barham Park buildings on which unnecessary business rates were paid due to Council 'oversight'.

PS. apologies in advance to anyone who finds either typos or grama errors in any of this.