Recently, my hon. Friend Ms Butler [Dawn Butler then an MP] invited young people who were members of her Facebook group to visit her in Parliament. Many of those young people were also members of the Brent Youth Parliament. Shortly thereafter, members of the Youth Parliament received a letter from Brent Council's senior lawyer. The letter stressed that Brent Youth Parliament is supported by the London borough of Brent and it counselled them as follows: "You will obviously need to give careful consideration as to whether you wish to align yourself with a particular person or group and what impact this may have on others' perception of you as a Brent Youth Parliament member. If you do decide to participate in local politics, you will need to give consideration as to which person or group you are willing to be connected with and any implications of this."

Many of these young people have been frightened by the letter and regard it as a warning shot. They have previously believed that Brent council was encouraging young people to become politically active, but they now consider that it encourages them only if they are sympathetic to the Liberal Democrats. What action can this House take to ensure that these young people are not bullied in this way by a local authority?

Unfortunately I think the problem is related to the way the Youth Parliament is set up, regardless of the political complexion of the administration. Members 'shadow' particular departments and take part in Council Meetings, Committees etc but this closeness, (incorporation some may say), seems to prevent open, public disagreement with Council policy.

In April 2011 Kishan Parshotam, the Chair of the Brent Youth Parliament, in a presentation to Scrutiny Committee, claimed that the YP was being ignored over their opposition to library closures LINK

Changes in youth provision are planned in Brent with options  ranging from  outsourcing to voluntary organisation to complete closure of the  youth service.

When these proposals were first announced there was an outbreak of comments from Youth Parliament members on Twitter and then silence descended. I understand that there were suggestions that members should not get involved in party politics, which is rather similar to what was said above during the Liberal Democrat administration.

If Brent Youth Parliament cannot campaign over drastic cuts to the youth service which will impact on young people throughout the borough, what can they campaign on? There was a presentation to the Council meeting on December 15th (see below) but I would expected press publicity at the least and public meetings, visits to youth centres and schools, to gain support for the retention of the service.

Of course Youth Parliamemnt Members should get involved in opposing the cuts - as loudly and vociferously as possible. 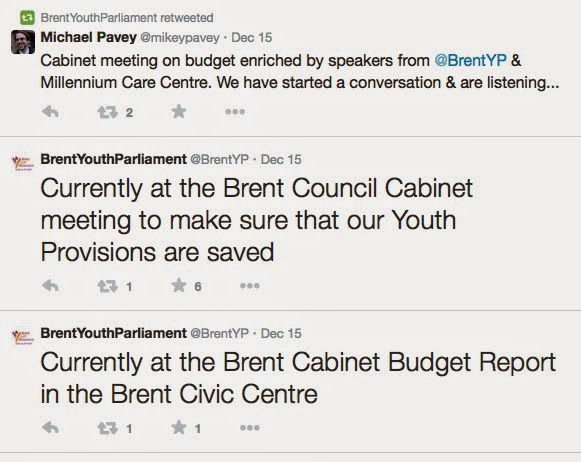 That is what happened when cuts were proposed by Ann John's Labour administration and the cuts were opposed  by young people with some success. LINK

A question I wanted to ask at the Scrutiny Committee was not taken. The Safer Neighbourhoods Team has spoken about their work to prevent youth offending and prevent re-offending which included work with gangs based on the Cincinnati model.  The police recognised the roots of crime in inequality and deprivation and the remedy in improved educational outcomes and employment opportunities.

They'd had some success and I wanted to ask what they thought the impact of  cuts in the youth service and the closure of Stonebridge Adventure Playground on their work.

Cllr James Denselow's blog LINK in an article on crime in Brent included this:


Cllr Zaffar Van Kalwala, who represents the Stonebridge ward, works with youths in Brent. He is calling for the availability of more activities in the borough to divert young people away from crime.

He said: “This is terrible news for our young people. Although it’s important we take tough action on youth crime, it’s also important we provide alternatives to keep young people out of crime.

“The government cuts to youth services, such as abolishing Brent Connexions, which gave career advice to young workers, is making it harder, not easier, to tackle youth crime.

“We need to divert our youngsters away from crime and gangs. If not, we could easily see another repeat of the London riots”.

Now as the result of Coalition cuts Brent is proposing to cut the Youth Service.  The social long term impact of cuts made for short-term financial gain is incalculable.


Tottenham sadly is now on the map for all the wrong reasons, an area that will long be known as the home of the riots and not for the first time as the 1985 riot also took place here. Prior to the riots, as many Youth Workers up and down the country are aware, Young People from Haringey (the borough where Tottenham is located) commenced a campaign to save their Youth Service. Despite their campaign, in Feb 2011 Haringey Council decided to cut the Youth Service by 75%. Cuts started to take effect from April 2011, the riots occurred in Aug 2011.

It will be wrong to state that the closure of the Youth Service led solely to the riots, but knowledge informs us that a circus of social circumstances leads to social disorder. For Young People in Haringey, specifically Tottenham there is an array statistics that demonstrate a negative impact on Young Peoples lives ranging from low educational attainment, high youth unemployment, high crime rates etc. Intelligence should have informed decision makers of the potential risks of the action they were about to make, especially as the Young People and wider community had told them at every juncture – Young People needed their Youth Service.

There was some self-congratulation at the Scrutiny Committee that Brent had not experienced rioting at that time but the message to the Council must be 'Brent Young People need their Youth Service' and Brent Youth Parliament members should feel free to shout that from the roof tops.

The current campaign in Haringey LINK

This is sinister. This is not democracy, although I can imagine a lot of Brent Labour Cllrs experience a similar time being silenced.

You can learn a lot from people who disagree with you the most as listening to a critical eye can help you improve. This is why Brent Labour are destined for mediocrity - they're not even prepared to look around at what other Labour run councils are doing for inspiration.

The Green Party values is the only party that would value youth members which is why as a party its long supported the right of people 16 years old an over to have their say on rotten showers such as these and be able to vote. Follow @YoungGreenParty or @LondonYGs

BYP ought to be a thorn in the side of any administration. So should back bench councillors.

The planned cuts to youth provision will have a devastating impact upon Brent's young people.

During my time as Chair of Brent Youth Parliament, we challenged the council on library closures and did have some success - albeit short term.

If the Youth Parliament is to continue to be an effective organisation, it should remain, as it was, independent from party politics. By engaging the group in an open, and transparent manner, the Council will be able to find new solutions to the cuts, and provide answers as to why the cuts are falling on the group of society who are going to be burdened with this Government's debt, £9000 a year tuition fees and wages that are far below the living wage.

Consultations begin next week on the budget, let us encourage the Council to go into schools, youth clubs and community groups and consult with them. After all, the impact of these cuts affect us all.

This is the first time I have heard of the comments of Barry Gardiner from 5 years ago. As far as I know various members of BYP were volunteering with and supporting different political parties as a way of gaining experience. Dawn Butler has been claiming credit for setting up BYP - she did not of course - as the initiative came during the Lib Dem led Administration.

As we know the Brent Lawyers are a law on to themselves and what promted their letter all those years ago is a bit of a mistery. We encouraged the young people to make up their own minds and decide how and with whom to get involved with.

On the more relevant cuts issue of course the BYP members should be free to have their say. Kish Parshotam cergtainly felt free to make strong representations on the impact of the Library cuts on young people but as we know Labour closed the 6 Libraries anyway. What I fear is that we now have another sham consultation and like all other groups any BYP response to the so called 'Labour Budget consultation' will of course be ignored.
Paul Lorber
PS. for a better understanding of tuition fees and their impact, pay back of loans I strongly recommend that people check out the moneysavingexpert.com website where amongs other things the Labour tuition fees and the current ones are compared and explained.